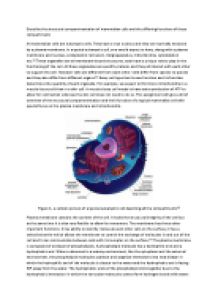 ﻿Describe the structural compartmentation of mammalian cells and the differing functions of these compartments All mammalian cells are eukaryotic cells. They have a true nucleus and they are normally enclosed by a plasma membrane. In a typical eukaryotic cell, one would expect to have, along with a plasma membrane and nucleus, endoplasmic reticulum, Golgi apparatus, mitochondria, cytoskeleton etc.[3] These organelles are all membrane-bound structures, each have a unique role to play in the functioning of the cell. All these organelles are specific proteins and they all interact with each other to support the cell. However cells are different from each other. Cells differ from species to species and they also differ from different organs.[5] Every cell type has its own function and its function determines the quantity of each organelle. For example, we expect to find more mitochondria in a muscle tissue cell than in a skin cell. A muscle tissue cell needs to have extra production of ATP to allow for contraction whereas the skin cell does not need to do so. This assignment will give a brief overview of the structural compartmentation and their function of a typical mammalian cell with special focus on the plasma membrane and mitochondria. ...read more.

The second form is facilitated diffusion, which also does not require the use of energy. There are integral proteins located through the cell membrane and these integral proteins carry polar molecules across the membrane. Moreover, cells are polarised; the polarisation of the cell is regulated by ion pump which pump Na+ and K+ across the cell membrane in and out of the cell.[5] The pumping of the ions across the cell membrane is important especially for nerve cells that utilises the polarisation and depolarisation of the cell to generate an action potential and move nerve impulse along the cell. The third method, active transport, does require energy. Active transport is the movement of molecules against the concentration gradient. The transport proteins are, in nature, glycoproteins.[6] They recognise the molecule (they have complementary sequence of glucose, mentioned above) and attaches the molecule to itself. The carrier protein goes conformation change and expels the molecule to the other side of the membrane. Again the process is vastly critical for secretory cells. In addition, the membrane has receptors on the surface which allow for communication.[6] The receptor enables cells to respond to external environment. ...read more.

The main function of the nucleus is to store DNA information. A nucleolus may be found in many of the mammalian cells. The site of protein synthesis occurs in the endoplasmic reticulum. There are two types of endoplasmic reticulum: rough and smooth. The rough endoplasmic reticulum is embedded with ribosomes which make the surface look rough. The ribosomes on the surface are responsible for protein synthesis. They can also be found floating freely in the cytoplasm. Smooth endoplasmic reticulum however controls phospholipid synthesis and detoxification of toxins.[6] One other organelle that is important with regard to proteins is the Golgi apparatus. Golgi apparatus is a series of flattened discs. Its main function is to modify proteins after their synthesis. They then package the protein into other vesicles to other parts of the cell.[5] To conclude, the compartmentation of the cell allows it to many differing functions. The plasma membrane allows the cell to be flexible and change shape but at the same time containing the integrity of the structure. The nucleus contains all the DNA information that allows for protein synthesis. Furthermore, there are mitochondria that produce the ATP that all living organism depend for existence. The cell is the smallest unit of an organism, but its differing compartments support all aspects of life. ...read more.