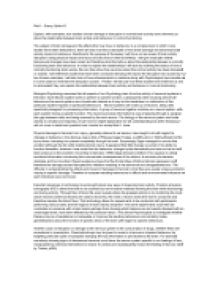 Explain, with examples, how studies of brain damage or disruption to normal brain activity have informed us about the relationship between brain activity and behaviour in normal functioning.

Part I - Essay, Option B Explain, with examples, how studies of brain damage or disruption to normal brain activity have informed us about the relationship between brain activity and behaviour in normal functioning. The subject of brain damage and the effects this may have on behaviour is a complex topic to which many studies have been dedicated to, there are also numerous examples of how brain damage and abnormal brain activity impact on behaviour, therefore for the purpose of this essay I will focus on two areas of brain activity disruption, being physical impact and injury and also that of chemical effects. I will give examples where behavioural changes have been noted and therefore what this tells us about the relationship between a normally functioning brain and behaviour. In order to explain the relationships I will start by outlining the basics of how a normally functioning brain works, this can then show how we know when this normal activity has been disrupted or ceased. ...read more.

Surprisingly Gage managed to survive this accident although he did suffer extensive brain injury. It appeared that little change occurred in his ability to function thereafter, however it was noted that his behaviour changed quite dramatically and was not as he had been previous to the accident. According to Damasio (1996) Gage showed a defect in his capacity to utilize emotional information concerning the more remote consequences of his actions. In summary he became obstinate and foul mouthed. Recent evidence shows that the frontal lobes inhibit emotional expression and therefore the damage caused disrupted this inhibition resulting in the abnormal and changed behaviour. The difficulty in understanding the effects and impact of damage to the brain is that they are usually unique accidents varying in specific damage. Therefore to compare resulting behaviours is difficult and environmental influence on each individual case not known. Important advances in technology have brought about new ways of observing brain activity. Positron emission tomography (PET) allows the brain to be scanned by non-invasive methods showing the brain while functioning and during activity. ...read more.

using drugs such as Prozac to target these receptors, however it is also known that exposure to sever stress or trauma can result in depression, therefore as an illness it is better to consider as both biological and social and a combination of both is required. In conclusion, the ability to analyse brain activity by both invasive and non-invasive methods has allowed researchers to find out which areas of the brain are responsible or at least involved in specific behaviours. The advancement of technology has allowed brain scanning to help pinpoint the level of activity within the brain while performing specific functions - therefore the ability to compare between a normally functioning brain and that of which has suffered either damage or disruption is possible and able to provide us with theories of the impact such damage has on human behaviour, however it is still difficult to put any such changes down to just biological influences as the social impact should never be ignored therefore a behaviour itself should be thought of as both biological and social. ...read more.