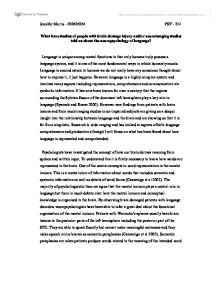 What have studies of people with brain damage injury and/or neuroimaging studies told us about the neuropsychology of language?

What have studies of people with brain damage injury and/or neuroimaging studies told us about the neuropsychology of language? Language is unique among mental functions in that only humans truly possess a language system, and it is one of the most fundamental ways in which humanity excels. Language is second nature to humans we do not really have any conscious thought about how to express it, it just happens. However language is a highly complex system and involves many aspects including representation, comprehension and communication via symbolic information. It has now been known for over a century that the regions surrounding the Sylvian fissure of the dominant left hemisphere play a key role in language (Eysenck and Keane 2000). However new findings from patients with brain lesions and from neuroimaging studies in un-impaired subjects are giving us a deeper insight into the relationship between language and the brain and are showing us that it is far from simplistic. Research is wide ranging and has looked at aspects of both language comprehension and production although I will focus on what has been found about how language is represented and comprehended. Psychologists have investigated the concept of how our brain derives meaning from spoken and written input. To understand this it is firstly necessary to know how words are represented in the brain. ...read more.

Damasio found that after examining the position of patients brain lesions she could associate naming deficits with specific brain regions. She revealed that brain damage to the left temporal pole (TP) correlated with problems retrieving the names of people, lesions to the anterior part of the left inferior temporal (IT) lobe correlated with problems naming animals, and finally lesions to the posterolateral part of the left inferior temporal lobe as well as the temporo-occipito-parietal junction (IT+) was associated with problems in naming of tools. In a corresponding study PET scanning was used to find that in neurologically normal subjects the same brain areas were activated when naming people (TP), animals (IT) and tools (IT+). However many of Damasio's patients were still able to activate various conceptual properties relevant to the word in question even if they could not name it. For example if shown a picture of a hedgehog they would reply, 'it is very spiky and sharp; it doesn't move very quickly and often gets hit by cars'. Consequently Damasio and her colleagues concluded that the lesioned brain areas found to correlate were involved in word retrieval and did not necessarily reflect the organisation of a conceptual network in the brain but more likely reflected the arrangement at the word or lexical level. They believed that their results showed that the brain had three levels of representation for word knowledge a conceptual level that contained semantic features of ...read more.

They found that regions of the occipital-temporal lobe were activated in response to unpronounceable letter strings. In a second study by the same group they found a large negative polarity potential around 200 msec in occipital-temporal regions in response to the visual presentation of letter strings. Importantly it was also found that this area did not respond to any other visual stimuli such as faces which suggests that this area is specialised for visual comprehension. Patients with lesions to this area offer further support for its role in visual language comprehension. Lesions to this area cause pure alexia where patients are unable to read words although they are still able to understand spoken language and their other aspects of language remain normal (Gazzaniga et al 2002). It is clear that the subject of language is very extensive and much research has been conducted by neuropsychologists to try and understand the fundamental aspects of language. Only the evidence relating to language representation and certain aspects of comprehension have been discussed here much additional evidence has been found in the area of language production. It seems clear that neurological and neuroimaging methods have given us invaluable insight into the area of language. However there are problems with both evidence from imaging techniques and brain damaged people. It is therefore most useful to converge neurological and neuroimaging evidence to create a more accurate picture as a single method cannot bring about a complete and reliable understanding of such a complex system as language. ...read more.