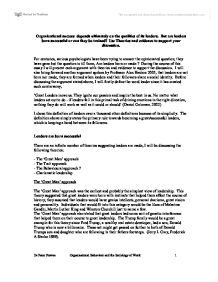 ARE LEADERS BORN OR MADE?

Organizational success depends ultimately on the qualities of its leaders. But are leaders born successful or can they be trained? Use Theories and evidence to support your discussion. For centuries, various psychologists have been trying to answer the opinionated question; they have gone but the question is till there, Are leaders born or made ? During the course of this essay I will present each argument with theories and evidence to support the discussion. I will also bring forward another argument spoken by Professor Alex Haslem 2005, that leaders are not born nor made, they are formed when leaders and their followers share a social identity. Before discussing the argument stated above, I will firstly define the word leader since it has created such controversy; 'Great Leaders move us. They ignite our passion and inspire the best in us. No matter what leaders set out to do - if leaders fail in this primal task of driving emotions in the right direction, nothing they do will work as well as it could or should' (Daniel Goleman. 2002) I chose this definition of leaders over a thousand other definitions because of its simplicity. The definition above simply states the primary rule towards becoming a great/successful leaders, which is keeping a bond between its followers. Leaders are born successful There are an infinite number of theories suggesting leaders are made, I will be discussing the following theories: - The 'Great Man' approach - The Trait approach - The Behavioural approach ? ...read more.

The definition of charismatic leadership, given by Max Weber 1922, describes a charismatic leader as some with 'a certain quality of personality' and the he goes on to say that 'these are not accessible to the ordinary person'; the two phrases mean that charismatic leadership comes from the inside, it is beyond the reach of someone who is trying to learn the skill. Therefore, through Max Weber's definition, he has made it clear that leaders are born with this type of leadership skill and it can not be learnt in any way possible. An example of someone who possessed the charismatic leadership skill is, Muhammad Ali. Muhammad Ali is not charismatic from his fights or the number of world titles he has held but to the fact that he was an excellent speaker. Muhammad Ali had was untouchable, no one could touch when he spoke, the whole world be shook up when he spoke. His body language, the way he used to move around made him an charismatic leader and I doubt even if someone said the exact same words he said, they wouldn't have gotten a response like him, since it was from inside. Leaders are born successful ! Leaders can be trained According to many, leadership is a bunch of skills that can be learned through various different ways. Paul Brewerton 2005, believes that leadership skills can be learned. Some of the key skills that successful leaders have are: - Powerful Communication Powerful communication is a must when wanting to become a successful leader, you wouldn't want to be a leader who mumbles or be a leader who doesn't affect people with the sound of their own voice. ...read more.

If you look at each proposition logically, you will see that they are all linked. A successful leader will have to be born with certain attributes, but some of the attributes can be learned through various courses but not all of them, as well as sharing social identity; without a social identity there won't be a leader. But, if I were to choose one over the other, I would choose that leaders are successful when they share a social identity with their followers. I personally believe that is only one trait of a leader, its followers. It doesn't even matter if leaders are born or if they can be trained to become successful, they both approximately share the same variables and key skills needed to become successful but if they don't share an social identity with their leaders, they can throw these skills in the bin because they won't be of any use. Without a social identity with is followers, there won't be a successful leader. Can you imagine what would've happened if people like: Nelson Mandela, Mahatma Gandhi, Martin Luther King, Malcolm X and Winston Churchill didn't share a social identity with its followers; they would've been just another person with a dream, even though one can argue that they were born, or learnt with certain skills that are hard to come by without anyone followers, I doubt they would be what they are. In the future, it will be impossible to create a new theory regarding leaders since the number of leaders is on an all time high. As time changes the view of leadership will also change, so there will never be a definite answer to the question. ...read more.