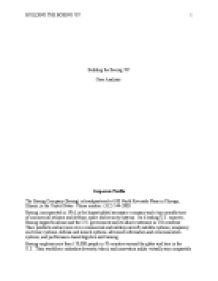 ﻿BUILDING THE BOEING 787 Building the Boeing 787 Case Analysis: Corporate Profile The Boeing Company (Boeing) is headquartered at 100 North Riverside Plaza in Chicago, Illinois, in the United States. Phone number: (312) 544-2000. Boeing, incorporated in 1916, is the largest global aerospace company and a top manufacturer of commercial jetliners and defense, space and security systems. As a leading U.S. exporter, Boeing supports airlines and the U.S. government and its allied customers in 150 countries. Their products and services cover commercial and military aircraft, satellite systems, weaponry, electronic systems, defense and launch systems, advanced information and communication systems, and performance-based logistics and training. Boeing employs more than 170,000 people in 70 countries around the globe and here in the U.S. Their workforce embodies diversity, talent, and innovation unlike virtually any comparable corporation; with nearly 150,000 have furthering education, including 25% with advanced degrees. Coupled with an extremely talented world-wide supplier base and Boeing is arguably one of the most highly skilled workforces in the world. While they are primarily divided into two business units, Boeing Commercial Airplanes and Boeing Defense, Space & Security, Boeing can effectively be segmented into five operating areas, with the additional 3 support elements: Boeing Capital Corporation (BCA), providing world-wide financial solutions; the Shared Services Group, providing a plethora of support services to Boeing globally; and Boeing Engineering, Operations, and Technology, conducting research, development, and application of innovation. Boeing Products and Services Boeing Commercial Airplanes has placed more than 12,000 commercial jetliners in service, offering the latest, cutting edge technology and design. William Boeing, builder of their first airplane in 1916, constructed a two-seat seaplane with minimal range. Since then, Boeing has grown to design and build aircraft with seating capacities exceeding 500 and ranges of more than 10,000 miles with the latest innovations. The Boeing Commercial Airplane sector counts more than 80,000 employees responsible for $36.2 billion in revenues in 2011. ...read more.

The opposition to outsourcing can use Boeings success, or failure, with the 787 development as fodder for the argument that Boeing should bring those jobs back to the U.S. Statistics show that U.S. multinational firms accounted for the outsourcing of more than 2.4 million jobs during the first decade of the 21st century alone. While it is difficult to accurately surmise accurate accounts, Outsaurus (2012) claims that number to be as high as 10.5 million jobs, with a projected U.S. unemployment rate of 2.5% if all jobs were brought home. Being victimized by that outsourcing can be exceptionally personal as exampled by Boeing Engineer Stephen Gentry. After being told he was being laid off, his job being outsourced to India, Gentry was further humiliated by having to train his Indian successor for three months, his pension used as blackmail for being a ?good soldier? (Fastenberg, 2012). There are many stories similar to Gentry?s as American business searches out cheap labor overseas at the sacrifice of American payroll. What many fail to account for is the jobs lost to importing as well as outsourcing. Ikenson (2012) explains that while a great deal of jobs are lost due to importing, he surmises that outsourcing is not a product of businesses chasing low wages and weak labor standards overseas, but that concerns cover the unified cost of production from conception to consumption. Companies should not concern themselves with expanding national employment, but minimizing costs to stay competitive and offer a financially friendly product. He further stipulates that most do not account for the fact that more than 5 million Americans are employed by U.S. subsidiaries of foreign corporations, with Boeings largest competitor, Airbus, employing over 1,000 Americans at their Alabama facility. Outsourcing goes both ways, we benefit and we feel the sting. These, among other realities, should be the basis for any Boeing response to outsourcing complaints. In order to garner overseas contracts, Boeing must partner with companies in those particular countries, as well as tapping onto the specific expertise that may be offered abroad that would be inferior and more costly at home. ...read more.