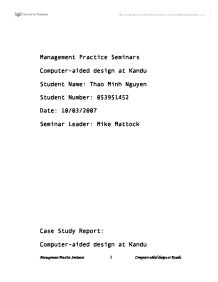 Understanding technology and change at work organization form has stimulated a large body of research. Early studies were concerned with developments in production technology and the effects of different levels of mechanization on the structure of jobs and experience of work. As advanced technology is increasingly being implemented in modern organizations, which implies a significant expectation of improving in productivity, Cummings and Blumberg (1987) emphasized the vital role of redesigning appropriate work structures in order to meet such expectation.

Nevertheless, choosing the most appropriate form of work organization which has to be consistent with the current organization culture and structure is not an easy task for any companies. Kandu plc is not an exception. To the extent of this case study which is also the terms of reference of the coming meeting at Kandu, the following problems are addressed:

Kandu plc is a large multidivisional company with its main line of business is the production of specialised components for another major industry.  Being so specialized that Kandu design most of its own production machinery which involves three processes: conceptual design, layout design and detailing. On the other hand, Kandu’s products design - usually is single components of complex shape is done by one person. Enjoying monopoly power and being the market leader amongst British engineering firms until the late 1970s, the company faced to severe international competition. As a result, a centralised facility was set up. The need of improving productivity, cutting costs and reduce lead time emerged significantly which in turn reinforced the desire to implementing Computer-aided design (CAD) technology in Kandu.

In the late 1970s, growth of CAD and computer graphics has been much greater than anyone predicted. In America, by 1976 Computervision which is the largest company totally dedicated to this industry, had sales of USD 20 million. Computervision which has been leading the industry with sales of USD 325 million in 1982 is only representative of the industry trend (Mikell, 1984). In Britain, interest in CAD increased since 1977. The main benefits of a CAD system are viewed as productivity improvement and reduction in design lead times.

As in the case of Kandu with its prominent market power, it was suggested that the investment on CAD was vital to set up facilities incorporating new technology in order to secure its competitiveness in growing markets. CAD at Kandu went through several problematic stages of implementation regarding to financial constraints, employee willingness to learn constraint, difficulty in sharing experiences and “tacit- knowledge”[1] across the organization and limitations of initial CAD system.

The implementation of CAD at Kandu is as follow:

First of all, the engineering design manager has to decide the extent to which the workforce itself is to be involved in discussing these issues. There are number of different groups at Kandu present varying degrees of interest, which in turn may impose a worker’s biased opinion in a particular issue. For instance: older and experienced designers who possess a relatively high degree of resistance to change, prefer using drawing boards than CAD system would not support further investment of CAD. Whilst recent graduates who virtually do not have any experiences and show their interests in using CAD would prefer further investments. Therefore, there are difficulties in deciding which groups to be included in the meeting.

Secondly, change is pervasive in the society, and in no area is the change greater than in process technology. Operating in such industry with increasingly domestic and international competition, Kandu is now facing to the problem of investing (fully or incrementally) in further CAD system requiring even more capital. Nevertheless, in order to make the final decision, Kandu has to analyse the short and long term costs and benefits of such CAD system so that market position can be retained while avoiding financial difficulty.

Thirdly, the objectives of Kandu are identified by the engineering design manager as to increase utilisation of the machines, to raise worker’s productivity and to reduce lead time. Traditional fragmental and specialized working division vs. introducing more flexibility are the two working structure to be considered. There is trade-off between specialisation and flexibility such as it can be argued that specialisation is what make Kandu – Kandu, as stated in the case study “the product is so specialised and the company itself so dominant in this market”. On the other hand, flexibility would enable Kandu to be more adaptive to work pressures change.

Last but not least, machine allocation is another key issue which caused a great deal of hard-thinking for Kandu in general and for the engineering design manager in particular. Some solutions can be suggested namely: individual workstations, shift-working and shared-facilities.

Employee motivation and commitment plays vital role in the success of a business. Motivation and commitment come from the fact that each employees feel like as if they were a part of the organization, of a family. Hence, perspectives and suggestions of all interested groups should be taken into account. Consequently, employer-employee relationship at Kandu would be improved by the means of creating more communication, trust and motivation.

Nevertheless, a large number of workers involved in the decision-making process require skilful leaders and a formal structure in order to function effectively. The idea of setting up a union should be considered since the current labour divisions and the scale of the workforce at Kandu is relatively large and complex. Through a union, all type and level of workers such as CAD and non-CAD designers, production machine designers and Kandu’s product designers would be co-ordinated and presented.

Given the background of Kandu as above, it can be drawn that the advantages of CAD system outweighs its shortcomings. There are more and more benefits from the use of CAD have been recognized, especially in the long term. However, the experiences in using CAD vary from organizations to organizations. Specifically applied to the business culture of Kandu, the main benefits and drawbacks of the CAD system are suggested as:

Key advantages of CAD at Kandu:

Key disadvantages of CAD at Kandu:

It is vital for Kandu to be resilient to changes to survive and maintain its long term market position. Given the above background of Kandu, optimal decision is likely to be in favour of granting further investment of CAD while trying to provide solutions for those shortcomings at the meantime. The main concern of the engineering design manager is the cost of this investment appraisal. It should be noted that productivity improvement demands times to be effective and that future advantages and profits may well be overweigh the cost of investment.

“When combined with good marketing and product-support services, manufacturing technology is the basis for market share, growth, and stability of employment. If manufacturing organizations are to compete successfully in today’s world economy, the important question is not whether to adopt new technology but how to accelerate its implementation”

They emphasised the essential role of organizational choices which are associated with the way new technology is implemented. Specifically, Kandu is in need of a work organization form which can increase productivity and utilisation level given the existing business culture and structure. In order to be successful, Kandu in this situation can use a forward-looking management where changes are anticipated. Communication can be improved by emailing system and common technology database to exchange experiences across all areas and by organising frequent social events for both machinery production designers and product designers through the union.

In order take all changes and problems anticipated, a very similar planning trend which was recommended by Mikell (1984) and Dawson (2003) should be formed:

It is pointed out that firms like Kandu will not be able to use new technology system effectively unless they increase productivity and efficiency of the existing workforce. Essentially therefore, Kandu must provide all necessary training for CAD operators. Training in this sense is also meaning that training for team working skills and promoting multi-skilled workers. Senior designers (non-CAD users) and recent graduates (CAD users) can work in a team so that two ways learning can be achieved. The former can share experiences and provide trainings on the conceptual design to younger designers, while the latter can motivate older designers to use CAD which will therefore increase utilisation of the whole CAD system (although Conceptual design will require a much slower incremental implementation of CAD)..

In the analysis of managing new technology, Boddy and Buchanan (1996) argued that skill and knowledge of new technology requires more than training. Only experience can develop “intuition, judgement and feel”. This means that work had to be organised in such a way adequate experience is acquired to develop the appropriate tacit knowledge.

However, financial constraints and other expenditure involving installing individual machines would as well causing problems. In the short run, it can be advised that Kandu can use sharing-facilities scheme to maximize utilisation of the whole CAD system such as assigning one work station for each pair of “non-CAD user and CAD user” or applying booking system for shared-facilities available for all designers when they are indeed of.  However, in the medium or long-run, individual machine with greater flexibility and worker satisfaction would definitely be the advantage.

Leading in the use of technology does not necessarily guarantee success for Kandu. It has been strongly emphasized by number of scholars and analysts that the need for choosing an appropriate and complementary work organization form is also vital when implementing new technology. The lack of trainings and long-range planning that takes into account future directions and capital investment plans prevents Kandu to take advantage of all potential benefits which CAD system can offer. By working together as a team, non-CAD and CAD would have mutual gains i.e. improving in productivity and reducing work pressures. Shift working is not the answer for Kandu since workers will have to work around the clock thus effects their working life substantially. In the short run, it is possible to use sharing facilities systems to have better chance in sharing experiences, ideas and communication. Therefore, utilisation level is increased.

Nevertheless in the medium and long term, providing individual machines and eliminating rigid division between production machine design and product design has to be considered as they possess enormous advantages.

[1] According to Boddy, Buchanan (1996), tacit knowledge can be defined that the ability to understand without being able to explain that understanding clearly to others.