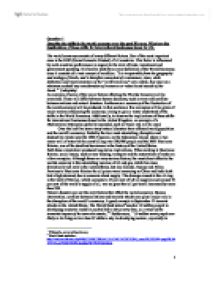 Describe the shifts in the world economy over the past 30 years. What are the implications of these shifts for international businesses based in UK.

Question 1 Describe the shifts in the world economy over the past 30 years. What are the implications of these shifts for international businesses based in UK. The world economy consists of many different factors. One of the most important ones is the GDP (Gross Domestic Product) of all countries. This factor is influenced by each countries performance in respect to the level of trade, investment and government spending. It is hard to identify an exact definition of the World Economy, since it consists of a vast amount of variables. "It is inseparable from the geography and ecology of Earth, and is therefore somewhat of a misnomer, since, while definitions and representations of the "world economy" vary widely, they must at a minimum exclude any consideration of resources or value based outside of the Earth." 1(wikipidia) An analysis of some of the major factors affecting the Worlds Economy will be examined. These will differ between human decisions, such as wars and conflicts between nations and natural disasters. Furthermore a summary of the fluctuation of the world economy will be produced. In this sections a few examples will be given of major nations influencing the economy, aiming to gain a vaster understand of the shifts in the World Economy. ...read more.

Such terrorist attacks have affected the mentality of many individuals; holidays planned by families have been cancelled due to the fear of further attacks. Over the last 30 years, there has been a huge transformation in China's export rate. Its production of goods has had a great impact on the world's economy. The manufacturing of goods have increased from an average of 50 per cent to an astonishing 90 per cent, becoming the manufacturing centre of the world. Technological gadgets, such as digital cameras, mobile phones and computers are some of the products produced by China. Most of this production is exported, increasing to $400 billion dollars since 1990 the exporting ratio. In the last 20 years, there has been a transformation in the composition of China's export trade. The share of manufactured goods has risen from 50 percent to more than 90 percent, with primary goods contracting to a share of just 9 percent. As China is increasingly becoming the manufacturing centre of the world, there Is another nation becoming the centre of information technology and services, India. Between 2000 and 2004, India increased dramatically their software exports, being about $6 billion in the year 2000, reaching an astonishing $16 billion in 2004. ...read more.

Furthermore, as the rising oil prices continue there is less consumption because the basic necessities of heating, food and travelling to work will overrun general consumer consumption and this will have a negative effect on the Multinational Enterprises, such as Tesco. Consequently, consumer products will not be wanted causing a reduction in production. There have been added global pressures on the economy, effecting directly Tesco's, on top of the oil prices spiking. The July attacks on London by Al-Queda terrorists have created further instability and fear. Due to this factor potential customers fearing another attack avoided going out, reducing incredibly purchases. In conclusion, its understandable that the shifts in the world economy, have a substantial impact on international businesses. Furthermore, due to natural disasters terrorist attacks and on going conflicts between nations, the world economy will be under constant fluctuation, which will greatly affect international businesses both domestically and internationally. Ultimately, at present time business growth in the world is evolving; within the European Union growth is solid with China and India continuing to be engines of growth. 1 Wikipedia, www.wikipedia.org 2 World Bank statistics , http://web.worldbank.org/WBSITE/EXTERNAL/DATASTATISTICS/0,,menuPK:232599~pagePK:64133170~piPK:64133498~theSitePK:239419,00.html 3 World Bank statistics, http://web.worldbank.org/WBSITE/EXTERNAL/DATASTATISTICS/0,,menuPK:232599~pagePK:64133170~piPK:64133498~theSitePK:239419,00.html 4 Deloitte, http://www.deloitte.com/dtt/section_node/0,1042,sid%253D5863,00.html ?? ?? ?? ?? 1 ...read more.