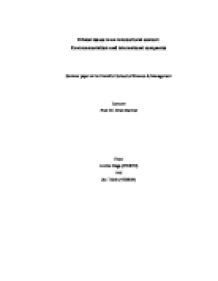 Ethical issues in an intercultural context: Environmentalism and international companies

Ethical issues in an intercultural context: Environmentalism and international companies Seminar paper at the Frankfurt School of Finance & Management Lecturer Prof. Dr. Erich Barthel From Andres Daga (4742070) And Jan Thiele (4728824) Frankfurt/Main, 30.06.2010 I. Contents 1. Introduction.....................................................................................3 2. Corporate Social Responsibility 2.1. Definition 2.2. The Four Mainstream Theories 2.3. Possible Business Cases 2.3.1. Excursion: Cause-related marketing and cause affinity 2.4. The Relationship between CC and CFP 2.5. Guidelines on the Example of the European Commission 3. II. List of Figures Figure 1: Definitions of corporate responsibility Figure 2: CSR matters to all of us III. List of Abbreviations CSR Corporate Social Responsibility CSP Corporate Social Performance SVT Shareholder Value Theory CC Corporate Citizenship CRM Cause-Related Marketing CFP Corporate Financial Performance LIC Lower Income Countries TEP Technoeconomic Paradigm ICT Information and Communication Technolgy 1. Introduction Placeholder 2. Corporate Social Responsibility 2.1. Definition First of all it has to be noticed that there does no straightforward definition for CSR exist. The growing interest of companies, government, the general public, academics or civil society organizations has only served to extend the array of definitions. In the very beginning those were focused on how companies are managed with view to society and then shifted to the behavior of the whole company rather than individuals within. This led to the debate what companies should be responsible for in another direction so that now there is less stress on the philosophical meaning and more on the pure act of being responsible. Nevertheless, the following figure shows at least some definitions of the understanding of CSR in the recent history.1 A responsible company is one that listens to its stakeholders and responds with honesty to their concerns. Starbucks, CSR Report, 2004 CSR commits us to operate in a socially responsible way everywhere we do business, fairly balancing the needs and concerns of our various stakeholders - all those who impact, are impacted by, or have a legitimate interest in the Company's actions and performance. ...read more.

This case study shows that through technology developments companies can be more environmental friendly on the one side and create a competitive advantage on the other side, and thus a win-win situation has been created. 3.3 The "The green technoeconomic paradigm" Another interesting research paper and approach has been made by Daniels (2005). "The main objective of this paper is to assess the potential for adopting and utilizing systems of material and energy saving technologies (characterizing a green technoeconomic paradigm ("green TEP")) in order to achieve higher levels of economic welfare and the long-term maintenance of environmental resources" (Daniels, 2005, p.455). Besides a number of constraints a green TEP may hold many potential advantages for economic and social development in lower income countries (LIC). By understanding the trade-off between economic welfare and environmental quality, strategies embodied in the concept of "ecological modernisation" (Huber, 1982; Simonis, 1989) is one of the primary modes of operationalizing sustainable development and moreover resulting in new technology deployments to reduce environmental pressure without compromising growth in economic welfare. In addition to that empirical research and the elaboration of strategies for ecological modernization have been confined primarly to the wealthier, industrialized countries (Daniels, 2005). This paper argues basic propositions of the ecological modernization view become more relevant for LICs if the notion is redefined as the "green technoeconomic paradigm" whereby the notion was first developed by Freeman (1992), Kemp (1994), Speth (1989) and others. TEPs are theoretical constructs intended to describe reasonably unique historical epoch at the national and supranational level, such as the era of steel,electricity and railways (1880s-1930s), based on innovation, research and development, and other aspects of technology change. There is some inconsistency concerning the exact nature of TEPs, but at least 5 major ones can be identified in higher income nations (Berry, 1997; Freeman, 1992, 1997). The typical TEPs are as follows: (1) coal, steam, factory establishments and company ownership (industrial revolution); (2) ...read more.