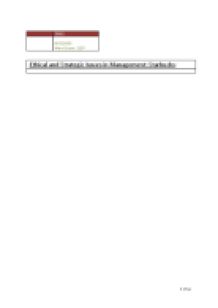 ï»¿2011 N0216099 Word Count: 2197 [Ethical and Strategic Issues in Management: Starbucks] ________________ Introduction A persistent problem organizations face is the effective management of their relationship with the variety of external agencies and audiences that impact their business, from the general public to specific stakeholders and pressure groups (De Blasio, 2006). In addition to the 25 million coffee farmers who depend upon coffee as their primary source of income, coffee contributes significantly to foreign exchange earnings, and plays a leading role in determining opportunities for employment and infrastructure development in more than 50 developing countries (IISD, 2011). Starbucks describe their corporation as being socially responsible by “conducting their business in ways that produce social, environmental and economic benefits to the communities in which they operate.” This is evidence of the triple bottom line agenda which focuses corporations “not just on the economic value they add, but also on the environmental and social value that they add – or destroy” (Elkington, 2004). This report will detail the manner in which Starbucks reduce the negative externalities of coffee production to remain sustainable in a market in which stakeholders demand corporations to conduct their business with strong ethical consideration and a consistent commitment to publically stated corporate values. 1.0 Analysis of Industry 1.1 Industry Overview Despite the economic downturn and its impact on consumer spending the UK coffee industry has continued to prosper. In 2010, the market grew by more than 12% compared with 2009 (Thompson, 2010) and the industry remains on track to reach £2 billion in consumer spending by 2012(Weston, 2009). Coffee industry players, consumers, and activists have underscored the role coffee plays in both the environmental and economic status of producing countries and have voiced a desire to change the system. This has led to the adoption of ethically friendly products in coffee shops, with fair trade products continuing to increase their share in the market reflecting the growing ethical awareness of consumers. ...read more.

This could be a problem when trying to implement the Starbucks experience internationally. Fig.5 PESTEL Analysis ________________ “Young children accompanying their parents” “Young teenagers who want to socialise with friends when out in town” “Young professionals who want a quick coffee on the go” “Students and writers etc. using the coffee shop as a workplace” “Middle aged women who meet for coffee with friends and socialise” “Businessmen on a break getting a caffeine fix” Brewed Coffee X X Espresso X X Espresso con ponna X X Café Americano X X X Cappuccino X X X Café Misto X X Café Latte X X X X Caramel Macchiato X Café Mocha X White chocolate Mocha X Classic hot chocolate X X Signature hot chocolate X X Brewed tea X X Steamed milk X Fig.6 Market segmentation – Customer Profiles ________________ 3.0 Environmental Sustainability Environmental sustainability can be defined as the maintenance of important environmental functions into the indefinite future (Ekins, 2000). Increased productivity in the production of coffee has adversely impacted the natural environment as is the case in Ethiopia where coffee production has been identified as a substantial cause of deforestation. Originally 34% of the country was covered by natural forest, but by 1989 this had declined to 2.7% (Rogers, 1992). Starbucks highlight their environmental focus areas as: 1. Ethical sourcing 2. Environmental stewardship 3. Community involvement However the main environmental issues facing Starbucks are: 1. Sourcing issues 2. Recycling – Both in-store/out of store A SWOT Matrix for choice of an environmental strategy (Fig.7) has been used to express the issues faced by the industry and how Starbucks have addressed them. In the case of ethical sourcing, Starbucks have excelled at setting a reputation as one of the industry’s corporate social responsibility leaders. Currently all espresso products are fair-trade certified and Starbucks are set to meet their self-imposed target of all products sold, being 100% Fair-trade by 2015. ...read more.

By addressing the rights of the producers, Starbucks provide better conditions for coffee farmers, helping to maintain a co-operative relationship and mitigating the impact of any negative press received. In doing so Starbucks ensure continuation in coffee harvesting in areas of high biodiversity is beneficial to all parties involved[a]. My recommendation for Starbucks to improve the sustainability of their future would be to provide even further support for the communities and workers involved in the production of coffee. This could be done by ensuring; 1. Producers should be paid wages that cover; production, living and environmental costs at a flat rate rather than being dependent on the variable commodity pricing of coffee. 2. Employment restrictions should be applied in accordance to international governing bodies rather than local laws. 3. Provide or promote mutual support among farmers to solve management problems in the farm; developing a community spirit. 4. Promote the guidelines needed to achieve fair-trade certification so more producers can benefit. Fair trade certification is available only to small farmer groups and organizations ? promote the guidelines needed to be met to achieve fair-trade status so more producers benefit. My research on the ethical philosophies espoused by Starbucks has led me to believe that this is a corporation which clearly understands that while shareholder demands for economic performance are unrelenting; their satisfaction would not be possible if they were cynical in applying ethical principles to their business operations. It is their realisation of the need to respect all stakeholders, particularly those involved in their supply chain that allows them to be confident of a sustainable future. It is clear to me that the Starbuck executive pays as much attention to their ?licence to operate? granted by public acceptance, as they do to their profits. I believe this is a company that clearly recognises the connection between market dominance and CSR leadership and have focused on the latter to achieve the former. I believe that Starbucks ethical focus is the foundation stone for their creation of a successful and enduring enterprise. ...read more.