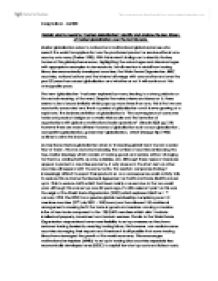 Explain what is meant by 'market globalization'. Identify and analyse the key drivers of market globalization over the last 30 years. Market globalization refers to national and multinational global customers who search the world for suppliers but use the purchased product or service either in one country or in many (Parker 1998). With this is mind I shall go on to identify the key factors of this global phenomenon, highlighting the advantages and disadvantages with appropriate examples to demonstrate. I shall mention in detail how trading blocs, less economically developed countries, the World Trade Organisation, BRIC countries, national culture and the internet all merge with one another and over the past 30 years has caused globalization and whether or not it will continue at this unstoppable pace. The term 'globalization' has been explored by many, leading to a strong debate on the actual meaning of the word. Despite the various views and ideas on it, there seems to be a broad similarity which pops up more times than one, this is that we are constantly surrounded and live in a period of globalization and it is ever growing at a rapid rate. ...read more.

This factor will continue to accelerate globalization because even thought the predominant LEDC's have now been occupied by multinational enterprises there are still some countries that have been left out like Africa and southern American countries which will also no-doubt ably be gobbled up into being used for its cheap labour, scarce workers rights and over keen governments. My next point will cover the important but controversial issue of 'national culture' which businesses face with expansion into other countries. One of the vital factors a company will have to consider when they internationalise is the new culture they are about to operate in. This could mean changing marketing, human resource management (HRM), the product itself, or the management styles. There are two ways a firm could approach this complex issue either by 'The Convergence perspective' (Kerr 1960; Levitt 1983) which suggests that a brand or company will be 'accepted' by the country and the way the business is run in terms of management practices, slots in with the national culture. Brands such as Coca-Cola, Nokia and Nike have standardised products and/or practices which can be used no matter which country they operate in. ...read more.

I do believe that to an extent trading blocs and FDI are mutually supporting on one another, as opening up markets to free trade has encouraged more FDI than it would have if it had not been liberalized. Nevertheless trading blocs and FDI cannot improve global economic growth by itself. The benefits of trading blocs and FDI to particular sectors of the industry will rely not only on their theoretical comparative advantage (i.e. China's) but also on countries abilities to restructure and upgrade operations through innovation, technological improvements and market experience to take advantage of market opportunities. All factors such as industrial output, increased productivity and efficiency within industries, high consumer saving, early consumption and government policies have all been impacted on by Globalization and so has the outcome of global economic growth. Globalization has the potential to continue its rapid growth in the foreseeable future. The factors that have propelled growth over the past 30 years are still in place. The world's economy is still a long way from a fully 'mature' status, where growth rates start to tail off but as long as Globalized countries maintain an open attitude towards foreign investment and invest heavily in infrastructure, innovation and other capital, it will continue to grow rapidly. ...read more.