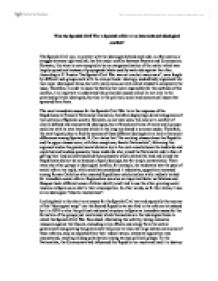 Was the Spanish Civil War a Spanish affair or an international ideological conflict?

The Spanish Civil war, in context with the ideologies behind each side, is often seen as a struggle between right and left; the first major conflict between Fascism and Communism. However, this view is now accepted to be an overgeneralisation of the matter which was largely spread out because of propaganda labels used by each side against the other. According to P. Preston “the Spanish Civil War was not one but many wars”, wars fought by different sub-groups each with its own particular ideology, undoubtedly organized into two major ideological blocs, but with many cross-currents which tended to complicate the issue. Therefore, in order to asses the factors that were responsible for the outbreak of the conflict, it is important to understand the primordial causes which lie not only in the polarised political ideologies, but also in the political, social and economical issues that sprouted from them.

The most immediate causes for the Spanish Civil War lie in the response of the Republicans to Franco’s Nationalist revolution, therefore displaying a direct antagonism of two sections of Spanish society. However, as we have seen, this was not a conflict of clearly defined and encountered ideologies, but of broad coalitions of many small groups each one with its own interests which in the long run shared a common cause. Therefore, the most logical place to find the sources of these different ideologies is to look at the social differences among Spaniards. R. Carr states that “the working classes chose the Republic and the upper classes were, with few exceptions, fanatic Nationalists”, following this argument and as the greatest social division lay in the rural areas between the landlords and exploited and landless peasants, those landlords who joined the Nationalist side in fear of getting their land collectivised and those peasants which wanted the land and joined the Republicans did not do so because of pure ideology, but for simple convenience. There were also other groups in ideological conflict, for example, the moderates saw the pace of social reform too rapid, while socialists considered it indecisive, opposition increased among Roman Catholics who resented Republican anticlericalism while radicals looked for immediate social reform. Regionalism was also an important factor as Catalans and Basques had a different sense of ethnic identity and tried to use the other growing social tensions in Spain as an abet to their emancipation. In other words, as R. Carr states, it was all an ideological “chaotic incoherence”.

Looking back to the short term causes for the Spanish Civil war and especially the sources of this “ideological soup” into the Second Republic we can find in the reforms introduced by it in 1931 to alter the political and social structure in Spain an immediate cause for the formation of the groups just mentioned, which themselves are the ideological basis in which the Spanish Civil War flourished. Abolishing the nobility, taking extensive measures against the Church, excluding army officers and clergy from the central government and granting the government the power to take over large estates were some of these reforms, and, as expected from their radical nature, extensive opposition was encountered, resulting in deep polarisation among various political groups. To the Nationalists, the Communists had influenced the Republic too much and lead it to destroy the economy, had failed to keep stability and attacked the traditional pillars of Spanish society: the Church, the Army and the monarchy. On the other hand, the left, who approved these attacks because of the nature of their own ideology, supported the Republicans. Additionally, as a result of the reforms, the landlords did everything possible to resist the taking of their land, while the army resented the cut back in its ranks. All this instability lead to the Republic to experience 26 governmental crises during a period of little more than four years which itself created internal division among the different leftist braches of Republican membership.

As we see, polarisation was not the result of new political ideologies or other intellectual reasons (as the left had already firm ideology by the 1930s), but only because of the political, social and economic difficulties encountered by Spain in the early 1930s which promoted social hatred, vital factor in the formation of the two fronts. Apart from social hatred, Regional hatred also sprouted as Catalonia and the Basque provinces wanted independence. The new republic faced other serious problems further on besides political and regional instability: the Church was openly hostile to the Republic, which in turn tried to reduce its power even more. It was felt that the army had too much influence and that might attempt another coup. Further economical problems were caused by the depression: agricultural prices were falling, olive oil and wine exports declined; peasant unemployment rose because land went out of cultivation. In industry steel production fell by almost 50% and iron by 30%. Furthermore, the opposition of two powerful left wing groups: the syndicalists and the anarchists weakened the Republic even more.

Even though we have assessed the role of the Second Republic in the formation of the different ideological blocs, and concluded that its failure was a major and immediate cause for the configuration of the groups, it is De Rivera’s government that constructed the basis on which the Second Republic collapsed or, in the words of H. Thomas, he “left behind him (De Rivera) no basis for a regime”. Additionally, when we analyse the role of the Second Republic in forming the ideological base of the Civil War we find that the two main and fundamental groups are already polarised when this is established. Therefore, to understand the nature of this primordial polarisation we need to take a look at the long term causes for the Spanish Civil War, more exactly, De Rivera’s government and finally the end of the Great War.

When De Rivera seized power in 1923 he introduced coercive methods to what he thought was a situation that deserved them: took military control of Barcelona, dissolved the Parliament, censored the press and suspended the jury system. As it is expected, considerable opposition arose. His regime brought to the surface problems between existing ideological groups, as it went far enough in terms of its radicalism to stir conservative fears, but not far enough to prevent the development of frustration and impatience on the left, and not only pulled down the monarchy with its own failure, as even before its collapse it was unpopular with the left because it passively accepted De Rivera’s dictatorship, but in the long run helped prepare the way for a more radical right-wing dictatorship, Franco’s. In the economic realm, Spain experienced an economic slump and an erosion of the Peseta that contributed to the growing feeling of social hatred generated initially in the final stages of the Great War. Summing up, De Rivera had only limited direct responsibility for the outbreak of the Spanish Civil War; however it was one the main influences on the unstable behaviour of the Second Republic.

One of the main long term causes for the polarisation of Spanish ideology lies in the incomplete transition of Spain from a feudal to a capitalist monarchy, as happened with some other European states. However, the social and economic conditions orchestrated by the Great War also contributed to this polarisation. Spain’s boom in agriculture and industry due to its ability to export to both sides of the conflict because of its neutral stance caused a massive “social dislocation” due to the sudden gains of certain individuals, the enormous exports caused temporary shortages and inflation as the living standards and basic consumption decreased which lead to an increase of working-class militancy. In consequence, the war deepened class divisions and prompted the emergence of conflicting ideologies as the bourgeoisie began to protest against the political monopoly of the landed oligarchy.

In conclusion, even though the immediate causes of the Civil War lie within the failure of the Second Republic to establish a solid and stable government, which itself created the arrangement of ideological groups seen in the two conflicting fronts, there are long term causes for the formation of these groups which started with a primordial polarisation, the two fundamental ideologies that fought in the war, which then branched out into different sub-groups. This branching of ideology represents mostly the outcome of short term economical and social conditions mostly for convenience and not spontaneous intellectual revaluation of the main trend. In this sense, each different ideology is a reflection of the social hatred and economic desperation, therefore being greatly important as factors in the outbreak of the Spanish Civil war not as ideologies themselves, but as symbols of internal turmoil and tension, which are after all the main faces and characteristics of any civil war.