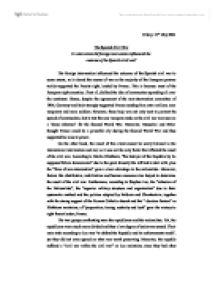 To what extent did foreign intervention influence the outcome of the Spanish civil war?

Friday, 21st May 2004 The Spanish Civil War To what extent did foreign intervention influenced the outcome of the Spanish civil war? The foreign intervention influenced the outcome of the Spanish civil war to some extent, as it altered the course of war as the majority of the European powers tacitly supported the Fascist right, leaded by Franco. This is because most of the European right countries, if not all, disliked the idea of communism spreading all over the continent. Hence, despite the agreement of the non-intervention committee of 1936, Germany and Italy strongly supported Franco sending him extra artillery, new weaponry and more soldiers. However, these help was not only sent to prevent the spread of communism, but to test the new weapons made as the civil war was seen as a 'dress rehearsal' for the Second World War. Moreover, Mussolini and Hitler thought Franco could be a powerful ally during the Second World War and thus supported his raise to power. On the other hand, the result of this event cannot be solely blamed in the international intervention and aid, as it was not the only factor that affected the result of the civil war. According to Martin Blinkhorn, "the betrayal of the Republic by its supposed fellow democracies" due to the great disunity the left had to deal with, plus the "farce of non-intervention" gave a clear advantage to the nationalists. Moreover, factors like distribution, mobilization and human resources also helped to determine the result of the civil war. Furthermore, according to Stephen Lee, the "cohesion of the Nationalists", the "superior military structure and organization" due to their systematic method and the policies adopted by Baldwin and Chamberlain, together with the strong support of the Roman Catholic church and the " decisive factors" as Blinkhorn maintains, of "preparation, timing, audacity and luck" gave the victory to right fascist leader; Franco. ...read more.

"And for all their spirit, for all their courage, it was foreign help that decided the outcome. That supplied by Germany and Italy was more powerful, and the nationalists accordingly won the war..." (McKendrick 201). The Non-Intervention Committee was a sham, "Not a man on the committee was unaware that Germany, Italy and, later, the Soviet Union were consistently violating the agreement. Since Nazi and Fascist contributions to the Rebels outweighed those of the Soviet Union to the Loyalists, the Nonintervention Committee succeeded only in assuring the death of the Spanish Republic" (Werstein 154). Republican soldier Timoteo Ruiz, after crossing the border into France and witnessing the train loads of held up supplies, commented, "If we had realized from the start that we were alone-even opposed to the bourgeois democracies which were boycotting us- it would have become a popular, revolutionary war..." (Fraser 328). Fraser, Ronald. Blood of Spain: An Oral History of the Spanish Civil War. New York: Pantheon, 1979. McKendrick, Melveena. The Horizon Concise History of Spain. New York: American Heritage, 1972. Tinker, Jr., F. G. "The Italian Debacle at Guadalajara." Men at War. Ed. Ernest Hemingway. New York: Bramhall House, 1979. Werstein, Irving. The Cruel Years: the Story of the Spanish Civil War. New York: Julian Messner, 1969. * According to Hitler "without the help of both countries there would be today no Franco." * Italy: * 50,000 ground troops * 950 tanks * 763 aircraft * 91 warships * Germany: * 16,000 military advisers * The latest aircraft * Services of the Condor Legion. * This helped in three main occasions: * When transporting Franco's troops from Morocco into southern Spain in German and Italian aircraft. o Enable conquest of Andalusia. * Boost to Nationalists morale by an increase in the Italian equipment. * A massive flow of armaments in 1939, which let Franco crush Catalonia. o Multinationals * Texaco, Shell, the Texas Oil Company and the Atlantic Refining Company were some multinational companies which contributed with the success of Franco. "Without oil, the Generalissimo's war machines would have ground to a halt." ...read more.