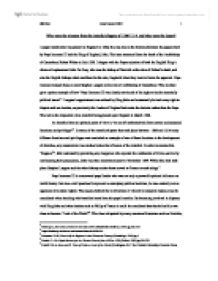 Who were the winners from the interdict dispute of 1206-1214, and who were the losers?

Who were the winners from the interdict dispute of 1206-1214, and who were the losers? A papal interdiction was placed on England in 1208, this was due to the frictions between the papacy held by Pope Innocent III and the King of England, John. The issue stemmed from the death of the Archbishop of Canterbury Hubert Walter in July 1205. It began with the Popes rejection of both the English King's choice of replacement John De Gray, who was the bishop of Norwich at the time of Hubert's death, and also the English bishops ideal candidate for the role, Reginald when they went to Rome for approval. Pope Innocent instead chose to elect Stephen Langton to the role of Archbishop of Canterbury. This incident gave a prime example of how "Pope Innocent III was clearly convinced of his right to decide essentially political issues1". Langton's appointment was refused by King John and customarily he had every right to dispute such an election, as previously the Leader of England had made the decision rather than the Pope. This led to the imposition of an interdict being placed upon England in March 1208. An interdict from an spiritual point of view is "to cut off authoritatively from certain ecclesiastical functions and privileges"2. ...read more.

There is a essential issue that the resolution of the interdict dispute, that spanned from 1206 until 1213, resolved. The problem not only reflected favourably on the English King and his ability to make the most of a difficult situation, but also highlighted Pope Innocent's political prowess. The issue being considered is the declaration by the French King Philip of the imminent invasion of England on the 8th of April 1213.7 The invasion was endorsed by Stephen Langton. It was not however directly approved by Pope Innocent, however Langton's support suggests it would be if the invasion had been acted upon. This threat of attack forced John's hand to wave the white flag and offer his kingdom to the papacy. This resulted in the reinstatement of Stephen Langton as the Archbishop of Canterbury, which can certainly be counted as a success for him personally and his representation of the Church in England. This must also be considered a success for John as his Kingdom was not ceased by the French and he had inherited Innocent as his "uncritical protector8". Not only is this event extremely important due to the reasons stated above it can also be considered to be a major catalyst in ending the papal interdict and John's excommunication. ...read more.

It can be compared with any battle the fact that John surrender to Pope Innocents demands ultimately suggest he lost the overall dispute. The main factor that exemplifies this is the signing of the treaty of 1213 which was integral in the battle for power as it offered Innocent a chance to expand his Roman catholic kingdom and also accept King John as his liegeman. But as in any defeat there must be a benefit for the loser in order for them to wave the white flag. On this occasion John gained an exemplary Archbishop of Canterbury, profited from the money he had taken from the exiled churchmen and most important gained an extremely valuable ally that would protect England from invasion, and its monarchy from power sapping reforms. It must also be noted that as the quotation from Moore stated above John was probably wining the battle until France became involved. Innocent however was clearly the more calculating tactician and managed to get every thing he had desired before the interdict had begun. The victory of the church is also evident by the longevity of the churches influence on England , which lasted until the reign of King Henry VIII. It took a reformation government in the 16th Century to remove the papal influence, which shows what Pope Innocent III started continued for a long period of time. ...read more.