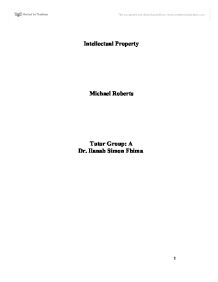 Intellectual Property Michael Roberts Tutor Group: A Dr. Ilanah Simon Fhima 'The Trade Marks Act 1994 was intended to expand the range of product attributes that could be registered as a trade mark, but the extent to which it has achieved that goal is debatable' (Michael Spence, 2007). Do you agree with this statement? Illustrate your answer by reference to the case law on the registrability of non-traditional trade marks. Since the Trade Marks Act 1994 ("the legislation") was enacted to implement the Trade Marks Directive (Directive 89/104) ("the Directive"), the traditional notion that trade marks are limited to words and pictures has been eradicated. Recently, all kinds of product attributes have fallen under the scope of trade marks: some successfully, others not so successfully. The impact the legislation has had on the trade mark registration system is unquestionable, but the extent to which its goals have been fulfilled is certainly a matter of debate. I will now briefly outline the structure of the essay. Firstly, the main provisions of the Trade Marks Act 1994 will be set out, following which I will outline various types of unusual trade marks with reference to appropriate case law. After this I will evaluate the extent to which the legislation has achieved its goals. ...read more.

The mark must be clear, precise, self-contained, easily accessible, intelligible, durable and objective. In the present case the smell was non-registrable, as the written chemical formula represented the chemical itself rather than the odour. The sample was not durable, and the written description was also insufficient. It seems that there has only been one successful odour registration since the legislation4, and it occurred before Sieckmann. It seems that in future the registration of a smell will be a very difficult prospect. The next major case concerned the registration of a colour as a trade mark. In Libertel Groep BV v Benelux-Merkenbureau the applicant wished to register the colour orange, along with the word 'orange'. The ECJ reiterated the Sieckmann criteria, under which a colour may be registered if it meets the requirements. A sample of the colour is insufficient at colour samples fade over time. However, the identification of a particular colour using an internationally recognised system (such as the pantone system) would apparently meet the Sieckmann criteria. This raises further issues, however, as there are only so many different shades which the human eye can distinguish, which would seem to defeat the point of the trade mark. If the ECJ only accepted shades which were visually distinguishable, this would severely limit the number of colours available to registration (the 'colour depletion theory'). ...read more.

To sum up the current position on unusual trade marks, smells and tastes appear to be very difficult to register, while the registration of colours as a trade mark seems perfectly feasible. The potential for registering sounds varies, depending on what the sound is. Music may be trade marked in the form of musical notation, but other sounds run into difficulties of graphic representation. So, it appears as though whilst the legislation has opened up the possibility for registration of a wider range of product attributes, many of the new applications have been refused by the ECJ. I would argue, therefore, that the legislation does succeed in expanding the range of registrable product attributes but perhaps not to any significant extent (though this may change in the future). I find the title question difficult to answer as it depends mainly on what the intention of the legislation actually is. There is a case for maintaining that the legislation's goal is simply to comply with the Directive, in which case it succeeds. The ECJ in making its decisions consulted the Directive, which was also used by Parliament in creating the legislation. So perhaps one could argue that the failure to significantly expand the range of product attributes is not a fault of the Trade Marks Act 1994 but rather a deficiency in the Trade Marks Directive. Word Count: 1,631 (inc. ...read more.