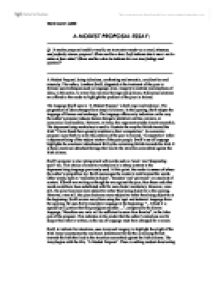 'A modest proposal could be read by an insensitive reader as a cruel, inhuman, and perfectly sincere proposal. Where and how does Swift indicate that it must not be taken at face value? Where and how does he indicate his own true feelings and opinions?

This indicates to the reader that the author's intentions are far deeper than what is written, as the use of language must have changed for a reason. Swift, to indicate his intentions, uses irony and imagery, to highlight the plight of the Irish. Irony accentuates the emotional detachment felt by the colonising British towards the Irish that lead to the atrocities committed against the Irish citizens. The irony begins with the title, 'A Modest Proposal'. There is nothing modest about eating the infants of impoverished Irish citizens. The technique turns on the assumption that his audience, regardless of their national or religious affiliations or status will agree with the fact that eating children is morally and socially unacceptable. Swift suggests eating poor Irish children is acceptable particularly at weddings and christenings. "I make no doubt that it will equally serve in a fricassee or ragout", indicates Swifts biting humour and use of imagery when talking about the children. ...read more.