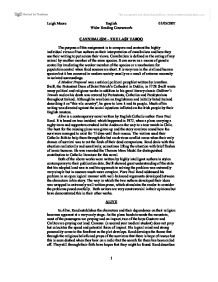 CANNIBALISM - THE LAST TABOO The purpose of this assignment is to compare and contrast the highly individual views of two authors on their interpretation of cannibalism and how they use their writing to put across their views. Cannibalism is defined as the eating of any animal by another member of the same species. It can serve as a means of genetic control by irradiating the weaker member of the species or a mechanism for population control when food sources are short. It is very rare in the civilised human species but it has occurred in modern society usually as a result of extreme necessity in isolated surroundings. A Modest Proposal was a satirical political pamphlet written by Jonathan Swift, the Protestant Dean of Saint Patrick's Cathedral in Dublin, in 1729. Swift wrote many political and religious works in addition to his great literary classic Gulliver's Travels and on his death was revered by Protestants, Catholics and Presbyterians throughout Ireland. Although he was born an Englishman and initially hated Ireland describing it as "this vile country", he grew to love it and its people. Much of his writing was directed against the social injustices inflicted on the Irish people by their English masters. Alive is a contemporary novel written by English Catholic author Piers Paul Read. It is based on true incident, which happened in 1972, when a plane carrying a rugby team and supporters crashed in the Andes on the way to a tour match in Chile. ...read more.

The second part of his argument was that the survivors had a moral right to stay alive by any means possible - even cannibalism. He stressed the fact that the corpses were now just a source of food: "It is meat" he said "That's all it is. The souls have left their bodies and are in heaven with God. All that is left here are carcasses, which are no more human beings than the dead flesh of cattle we eat at home." The argument progressed and Marcelo questions what they must have done for God to make eat the bodies of their dead friends. Zerbino then asks " But what do you think they would have thought?" to which Marcelo has no reply. Zerbino completes his argument: " I know that if my dead body could help you stay alive, the I'd certainly want you to use it. In fact, if I do die and you don't eat me, then I'll come back from wherever I am and give you a good kick in the arse." This statement leads to the boys making a mutual pact that in the event of death their bodies should be used to help others survive. This train of thought is continues in a letter that Gustavo writes to his girlfriend: One thing that will seem incredible to you - it seems unbelievable to me - is that today we started to cut up the dead in order to eat them. ...read more.

�50,000 pounds that will go directly via the parents into the Irish economy Swift enhances his proposal with several statements, which illustrate the satirical nature of the piece. He likens the Irish people to a commercial herd of animals referring to fertile female as breeders. He further advances the theory by suggesting that the optimum age for culling is one as he was assured by an American acquaintance that a young healthy child well nursed is at a year old, a most delicious, nourishing and wholesome food whether stewed, roasted, baked or boiled. With heavy sarcasm, Swift suggests his scheme will prevent those voluntary abortions and that horrid practice of women murdering their bastard children. A more unusual benefit quoted is that it would be a great inducement to marriage and men would become as fond of their wives during the time of their pregnancy, as they are now of their mares in foal, their cows in calf or their sows when they are ready to farrow. There are several references to Roman Catholics in this piece starting with his reference to people leaving Ireland to fight for the Pretenders in Spain. He postulates that this scheme will drastically reduce the number of Roman Catholics who might be at odds with their English Protestant masters citing them as the principal breeders of the nation and the number of Popish infants is at least three to one in this country. This logical train of thought dealing with both financial and social aspects of Swift's outrageous cannibalistic scheme and adds credibility to his suggestions. ...read more.