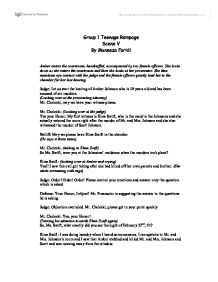 Group 1 Teenage Rampage Scene V By Muneeza Faridi Amber enters the courtroom, handcuffed, accompanied by two female officers. She looks down as she enters the courtroom and then she looks at her prosecutor. She then maintains eye contact with the judge and the female officers quietly lead her to the chamber for her last hearing. Judge: Let us start the hearing of Amber Johnson who is 18 years old and has been accused of six murders. (Looking over at the prosecuting attorney) Mr. Chelezki, may we have your witness please. Mr. Chelezki: (Looking over at the judge) Yes your Honor. My first witness is Elma Swift, who is the maid to the Johnsons and she actually entered the room right after the murder of Mr. and Mrs. Johnson and she also witnessed the murder of Scott Johnson. Bailiff: May we please have Elma Swift in the chamber (He says it three times) Mr. Chelezki: (talking to Elma Swift) So Ms. Swift, were you at the Johnsons' residence when the murders took place? ...read more.

Mr. Armstrong, were you in the school when Amber Johnson slaughtered those three men? Mr. Armstrong: Yes, I was. (The judge scribbles something on his pad) Mr. Chelezki (to Armstrong): Thanks! Judge: (to Chelezki) Your witness please Mr. Chelezki: That's all your Honor. I want to make my final statement sir. Judge: Proceed! Mr. Chelezki: All my witnesses suggest that Amber Johnson is a killer and she deserves to hang. She has killed 6 people and to be fair, I want you to take this into consideration. That's all your Honor. Judge: (to Defense) Your witness please! Defense: I would like to call upon Dr. Broderick, Amber Johnson's psychiatrist. Bailiff: Dr. Broderick, please come to the chamber (Says it three times) Defense (to Dr. Broderick): Is it true that Ms. Amber Johnson was being seen at your clinic since she was 16 years old? Dr. Broderick: That's correct! Defense: Can you tell us what the problem was? Dr. Broderick: Yes, she was emotionally disturbed. She thought that her parents did not pay enough attention to her. ...read more.

It was fun to collaborate in a group and I learned a lot about other people's point-of-views in general about life just by listening to what each of them contributed to the group. I would say that in a group there is always one person who becomes the implied leader, but this did not happen in our group. Everyone's opinion was important and was taken into consideration before making important decisions about scenes and presentation. The hardest part was editing: contributing our different scenes and making them into one long play was challenging. I had to cut down a lot of things in my scene because it was the one which wrapped the whole play up. I had to alter the details some, and others did the same so the play will run smoothly. All in all, it was a very different experience and brought it some of my writing skills that I was unaware of. I have written some poetry in another language, but it was totally different to write dialogues for someone. I did not come up with the lead character, so I was doing my best to portray what I thought of the character. ...read more.