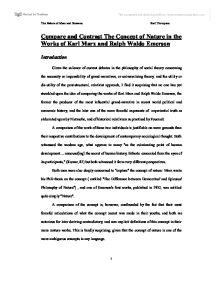 Compare and Contrast The Concept of Nature in the Works of Karl Marx and Ralph Waldo Emerson Introduction Given the salience of current debates in the philosophy of social theory concerning the necessity or impossibility of grand narratives, or universalising theory, and the utility or dis-utility of the post-structural, relativist approach, I find it surprising that no one has yet stumbled upon the idea of comparing the works of Karl Marx and Ralph Waldo Emerson, the former the producer of the most influential grand-narrative in recent world political and economic history, and the later one of the more forceful exponents of experiential truth as elaborated upon by Nietzsche, and of historical relativism as practised by Foucault. A comparison of the work of these two individuals is justifiable on more grounds than their respective contributions to the development of contemporary sociological thought. Both witnessed the modern age, what appears to many "as the culminating point of human development... announc[ing] the secret of human history, hitherto concealed from the eyes of its participants," (Kumar, 81) but both witnessed it from very different perspectives. Both men were also deeply concerned to "capture" the concept of nature: Marx wrote his PhD thesis on the concept ( entitled "The Difference between Democritus' and Epicurus' Philosophy of Nature") , and one of Emerson's first works, published in 1932, was entitled quite simply "Nature". A comparison of the concept is, however, confounded by the fact that their most forceful articulations of what the concept meant was made in their youths, and both are notorious for later deriving contradictory, and non-explicit definitions of this concept in their more mature works. This is hardly surprising, given that the concept of nature is one of the more ambiguous concepts in any language. An analysis of the texts of these two influential thinkers show that the concept of nature is central to understanding their political and social critiques of their contemporary societies and that these critiques, as well as their perspectives on the historical ...read more.

It is here that man can come closest to God, or universal spirit, it is here that man can join his tiny mind to the great unknowable universe. Nature, as opposed to society (the realm of men) is where man can be close to God. Because Nature contains God, it is essentially unknowable analytically, and the true value of nature lies in man's experiential awareness of it. Freedom is to be reached individually, by a unique joining with the spirit in untouched nature. Thus nature has a timelessness to it that never changes. Nature is constant, and always there to fulfil human emancipatory needs. Emancipation is cast in intellectual terms, and there is no need to adapt the productive relationship between man and nature to achieve human equality. Nature is characterised by inequalities and tensions, and this is seen as being natural and acceptable, tension being conducive to the intellectual perfection of the self. Emerson was a very different thinker to Marx, there being nothing in his thought that classifies him as especially modern. Indeed, his approach to philosophy is, if classifiable at all, post-modern. While Marx developed his historical materialist approach through a radical critique of The German Ideology, Emerson wrote shorter Essays on a much broader range of topics. After decades of thinking, Marx had developed a grand critique of an economic system based on a radically new ontology, whereas Emerson had produced a huge amount of poetry, prose and essays discussing the problems of the salient themes of modern life, leaving his audience with the message that these problems, these tensions of modernity, were here to stay, because there was no possible way of knowing what the nature of reality and thus the source of these problems were, and, even more significantly, that any one perspective on modern life was as valid as the next. Nature as Spirit Emerson's concept of nature is very different to that of Marx. ...read more.

under a universal umbrella, in order that human faculties can deal with them in a holistic way. This fusion of problem and solution, while it rests on dubious assumptions about the nature of reality is, in my opinion, more eco-centric, by virtue of the simple fact that the approach to the problems is holistic, while the solution may be atomistic. Emerson, on the other hand, appears to take a holistic approach from the outset. His ultimate stance is that nature is non - understandable. It is possible to read this as an assertion of the fallibility of human faculties, just as it is possible to read his experiential truth as a celebration of the magnificence of nature. However, his belief that any man, no matter how poor, can find freedom in nature, fails to take account of the fact that material poverty in a materially rich society is not conducive to harmony in any way. I am not sure what to make of this. His failing to address the more obvious problems of American society in any effective way could mean that his transcendentalism is merely a form of escapism, on the other hand, it could be an assertion of the fact that the human mind is the source of all conflict in the first place, and his unwillingness to settle on any one point of view could be his acting on the belief that opinion needs to be quelled before freedom can be attained. It is hard to come to any definite conclusion as to where Marx and Emerson stand as regards their concepts of nature, but what I have tried to show is that the fact that Marx can be shown to be a techno-centric productivist and that Emerson can be shown to be in reverence of the unfathomable wonders of spiritual nature does not mean that Emerson is the head and Marx is the tail of eco-philosophy coin, and neither does it necessarily mean that Emerson is more "deep - green" than Marx, although it may at first look like it. ...read more.