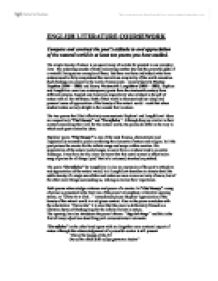 Compare and contrast the poet's attitude to and appreciation of the natural world in at least two poems you have studied.

ENGLISH LITERATURE COURSEWORK Compare and contrast the poet's attitude to and appreciation of the natural world in at least two poems you have studied. The simple beauty of nature is an aspect many of us take for granted in our everyday lives - the endearing sounds of birds welcoming another day and the powerful gush of a waterfall being some examples of these. But there are those individuals who have endeavoured to fully comprehend the marvellous complexity of the world around us. Such findings are present in the work of many poets - namely Gerard Manley Hopkins (1844 - 1889) and Henry Wadsworth Longfellow (1808 - 1882). Hopkins and Longfellow were two contemporary poets from the nineteenth century from different cultures, English and American respectively who relished in the gift of nature with all her attributes. Both of their work is characterised by a deep and personal sense of appreciation of the beauty of the natural world - work that when studied makes us truly delight in the wonder that is nature. The two poems that I feel effectively communicate Hopkins' and Longfellows' ideas are respectively "Pied Beauty" and "Snowflakes". ...read more.

Then foreshadowing a technique used later in the poem, Hopkins immediately narrows his broader focus down to refer to the streaked markings on one "brinded cow". In "Snowflakes" this religious theme is expressed in describing the shape of the snowflake as "some divine expression" indicating a superior eternal contribution to the formation of the snowflakes. As we know the two poems are about beauty that is all around us, but I noticed that both poems focus on tiny and large natural entities. In "Pied Beauty" Hopkins comments on "rose-moles" on trout and "finches-wings". It seems that no aspect or detail of nature is too tiny or insignificant to escape the poets' attention. But on the contrary he also refers to "skies" and "landscape" showing the range in which nature is present. In "Snowflakes" Longfellow is concentrating more on the actual snowflake rather than an overview of all things 'beautiful'. Yet in contrast he also comments on the "woodland" and "harvest fields" in which the seemingly harmless snowflake had somehow devoured. Both poems also use alliteration to achieve their impact in places. In "Snowflakes" he describes the woodland as being "brown and bare" and the movement of the snow as "Silent, and soft, and slow". ...read more.

The tone in "Pied Beauty" is one of joyous exuberance by use of language such as "Glory be" and "Praise". On the contrary "Snowflakes" takes a more mellow, introspective almost restless approach in describing its subject "troubled heart" and "secret of despair" are some examples of this. Also in "Pied |Beauty" the poem is celebratory and is about beauty. "Snowflakes" on the other hand is simple and complex and is beauty. After studying both poems in depth I feel that through the work of Longfellow I now would see and appreciate the complexity in the simplicity of snowflakes. But overall I prefer the work of Hopkins. His exploitation of the verbal subtleties and music of English, of the use of alliteration, repetition and a highly compressed syntax were all in the interest of projecting deep personal experiences, including his sense of God's mystery, grandeur and mercy in "all things counter". He called the energising prosodic element of his verse 'sprung rhythm' in which each foot may consist of one stressed syllable instead of the regular number of syllables used in traditional rhythm. The result is a muscular verse, intense and vibrant that combines accuracy of observation, daring imagination, deep feeling and intellectual depth. All in all a wonderful piece that for me as of yet shall remain one of the most touching I have read. ...read more.