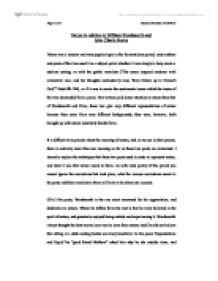 Nature in relation to William Wordsworth and John Clare's Poetry.

Nature in relation to William Wordsworth and John Clare's Poetry Nature was a massive and very popular topic in the Romanticism period, most authors and poets of the time used it as a subject point; whether it was simply to help create a sublime setting, as with the gothic novelists ("The scene inspired madame with reverential awe, and her thoughts involuntarily rose, 'from Nature up to Nature's God.'" Radcliffe 104), or if it was to create the sentimental scene which the tastes of the time demanded from a poem. Few writers paid closer attention to nature than that of Wordsworth and Clare, these two give very different representations of nature because they came from very different backgrounds; they were, however, both brought up with nature constantly beside them. It is difficult to be precise about the meaning of nature, and, as we see in their poems, there is certainly more than one meaning as far as these two poets are concerned. I intend to explore the techniques that these two poets used in order to represent nature, and what it was that nature meant to them. As with most poetry of this period you cannot ignore the revolutions that took place, what the various revolutions meant to the poets and their reactions to them will have to be taken into account. ...read more.

This is not the only sense of revolution we get in this poem, after all the last time he was at 'Tintern Abbey' he had just returned from France which was in the midst of revolution. Wordsworth reminisces over his past self and gives the impression of an overly excited man with 'coarser pleasures', he was still full of the energy he experienced in France, yet he says he was 'like a man / Flying from something that he dreads...' (70-71) which gives us an insight into the horrors of France at that time. In actual fact 'flying from something he dreads' was exactly what he was doing when leaving France; he may have supported the cause but he did not like the violence involved and was forced to leave a pregnant lover there during his flight. Wordsworth believed that nature was a source of knowledge and he reflects that in his poetry and especially in 'Tintern Abbey'. Near the end of the poem Wordsworth talks of nature as if he were an apprentice of hers: ...she can so inform The mind that is within us, so impress With quietness and beauty and so feed With lofty thoughts,... ...read more.

Something that did affect him however was the agricultural, and industrial revolution. In 'The Destroyer' he shows his hatred of what man does to the landscape, it is a fight between man and nature; the shepherd 'With almost every footstep crushed a flower' and the wind cannot resurrect it, yet "ironically, those beaten down by the dogs recover and become as "happy as the wind'" (Storey, 133). In the final four lines Clare expresses his sadness that such nature can be so easily destroyed "Like crouching tigers had howled havoc here?" To Clare nature is just the countryside, he knows it too well for it to mean anything else, and he has an awareness of nature like no one else. He writes what he sees and that is all. For Wordsworth things are different, he tells us that Nature is 'the nurse' / The guide, the guardian of my heart...'; Wordsworth feels there is much more to nature than just its beauty. Both men have "an intense devotion to watching and describing nature" (Williams, 133), the way in which they do it however is very different. Wordsworth appealed to the Romantic critics of his time, Clare did also but only until the novelty of a peasant being able to write poetry wore off. Word Count: 2,172. ...read more.