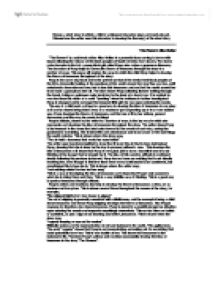 Choose a short story in which a child or adolescent character plays an important part.

“The Flowers” by acclaimed author Alice Walker is a powerful story coming to terms with issues following the release of the black peoples of South America from slavery. The story’s main character is that of a young black girl called Myop who makes a gruesome discovery. The character of Myop helps to convey the theme of innocence through the story in a number of ways. This essay will explore the ways in which the child Myop helps to develop the theme of innocence throughout of the story.

Myop is ten years old, black and is the perfect symbol of the newly freed black peoples of the time; innocently looking at the goodness of the world around her now they are free, until unfortunate circumstances force her to lose this innocence and see that the world around her is not such a good place after all. The story shows Myop collecting flowers walking through the forest, taking an unknown route leads her to the body of a dead man. It is evident he man has been the victim of a racist “lynching” when the evidence is further investigated. Myop is changed and is no longer the innocent little girl she was upon entering the woods.

The use of a child such as Myop is a good way to develop the idea of innocence in any story as it can be shown being taken away as a necessary part of growing up or in a more sudden way. Myop develops the theme of innocence, and the loss of it by her actions, general demeanour and the way she reacts to things.

Myop’s attitude, shown by the writer in a number of ways, is the key way in which she represents and develops the idea of innocence throughout the story. The writer shows Myop to be innocent in the sense that she looks forward to the events of each day, seeing the goodness in everything. She is full of life and adventurous and is not aware of the bad things the world contains. This is shown where the story says;

“The air held a keenness that made her nose twitch”

The writer uses transferred epithet to show that it is not the air that is keen but instead Myop, showing that she is keen for the day to proceed, without a care.  This develops the idea of innocence as it shows that Myop is very glad just to have a beautiful new day not thinking of the danger that is brought by it. The idea of this carefree attitude is continued shortly following the previous statement. Myop has no focus on anything that is not directly involving her, even though at this time there were many racist issues to be considered, but nonetheless this is how she is. This is shown where the writer says;

“and nothing existed for her but her song”

This is a way of developing the idea of innocence as it shows that Myop’s only concern is what she is doing there and then. This is a very childlike way of thinking. This is a good way to portray innocence through attitude.

Myop’s actions and reactions also help to develop the theme of innocence as they are so careless and fancy-free. This is shown several times throughout the course of the story, for example;

“She skipped lightly from hen house to pigpen”

The act of skipping is generally associated with childishness, and the concept of being a child shows innocence and hence Myop skipping develops the theme of innocence. Also Myop’s response to situations also shows innocence. Myop is placed in a possibly dangerous situation upon entering the woods and responds surprisingly unworriedly. This can be taken as foolish or confident, or just a sign of not knowing any better; innocence. This is shown when the story says;

“vaguely keeping an eye out for snakes”

Biblically snakes are the representation of evil and badness in the world. This applies here. The word “vaguely” shows that Myop is not concentrating on looking out for something that could potentially harm her. This is very foolish of her. This shows her innocence to the badness in life. Therefore Myop’s actions and reactions successfully develop the idea of innocence in the story “The Flowers”.

Also as the final development of innocence, the writer shows that it is a necessary part of life that it is taken away by some force or another, in this case Myop’s innocence to the racism in the world around her is taken away upon the finding of the dead mans body. The representation of Myop’s happy carefree life is the season of summer; once her innocence is gone it is shown clearly by the writer;

“Myop laid down her flowers. And the summer was over. “

The laying down of the flowers is a very mature and adult like  gesture to make and this signifies that Myop has matured and lost some of her childhood innocence. This develops the theme of innocence during the story.

In conclusion, Myop, a black girl of ten years old is a child who develops the theme of innocence in Alice Walkers short story “The Flowers”. This is done through the conveying of Myop’s attitude, actions and reactions. It shows that the loss of innocence is a part of growing up.