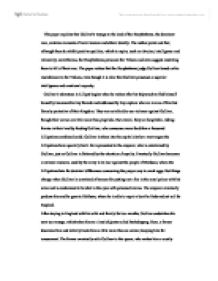 This paper explains that Gulliver's voyage to the land of the

This paper explains that Gulliver's voyage to the land of the Houyhnhnms, the dominant race, contains elements of racial tension and ethnic identity. The author points out that, although they do exhibit positive qualities, which to aspire, such as altruism, intelligence and rationality; nevertheless, the Houyhnhnms persecute the Yahoos and even suggest castrating them to kill of their race. The paper relates that the Houyhnhnms judge Gulliver based on his resemblance to the Yahoos, even though it is clear that Gulliver possesses a superior intelligence and emotional capacity. Gulliver's adventure in Lilliput begins when he wakes after his shipwreck to find himself bound by innumerable tiny threads and addressed by tiny captors who are in awe of him but fiercely protective of their kingdom. They are not afraid to use violence against Gulliver, though their arrows are little more than pinpricks. But overall, they are hospitable, risking famine in their land by feeding Gulliver, who consumes more food than a thousand Lilliputians combined could. Gulliver is taken into the capital city by a vast wagon the Lilliputians have specially built. He is presented to the emperor, who is entertained by Gulliver, just as Gulliver is flattered by the attention of royalty. Eventually Gulliver becomes a national resource, used by the army in its war against the people of Blefuscu, whom the Lilliputians hate for doctrinal differences concerning the proper way to crack eggs. ...read more.

This difference of opinion seems to justify, in their eyes at least, the warfare it has sparked. Similarly, the use of physical force against the Yahoos is justified for the Houyhnhnms by their sense of moral superiority: they are cleaner, better behaved, and more rational. But overall, the novel tends to show that claims to rule on the basis of moral righteousness are often just as arbitrary as, and sometimes simply disguises for, simple physical subjugation. Like many narratives about voyages to nonexistent lands, Gulliver's Travels explores the idea of utopia-an imaginary model of the ideal community. The idea of a utopia is an ancient one, going back at least as far as the description in Plato's Republic of a city-state governed by the wise and expressed most famously in English by Thomas More's Utopia. Swift nods to both works in his own narrative, though his attitude toward utopia is much more skeptical, and one of the main aspects he points out about famous historical utopias is the tendency to privilege the collective group over the individual. The children of Plato's Republic are raised communally, with no knowledge of their biological parents, in the understanding that this system enhances social fairness. Swift has the The Individual Versus Society Lilliputians similarly raise their offspring collectively, but its results are not exactly utopian, since Lilliput is torn by conspiracies, jealousies, and backstabbing. ...read more.

As in Plato's ideal community, the Houyhnhnms have no need to lie nor any word for lying. They do not use force but only strong exhortation. Their subjugation of the Yahoos appears more necessary than cruel and perhaps the best way to deal with an unfortunate blot on their otherwise ideal society. In these ways and others, the Houyhnhnms seem like model citizens, and Gulliver's intense grief when he is forced to leave them suggests that they have made an impact on him greater than that of any other society he has visited. His derangement on Don Pedro's ship, in which he snubs the generous man as a Yahoo-like creature, implies that he strongly identifies with the Houyhnhnms. But we may be less ready than Gulliver to take the Houyhnhnms as ideals of human existence. They have no names in the narrative nor any need for names, since they are virtually interchangeable, with little individual identity. Their lives seem harmonious and happy, although quite lacking in vigor, challenge, and excitement. Indeed, this apparent ease may be why Swift chooses to make them horses rather than human types like every other group in the novel. He may be hinting, to those more insightful than Gulliver, that the Houyhnhnms should not be considered human ideals at all. In any case, they symbolize a standard of rational existence to be either espoused or rejected by both Gulliver and us. ...read more.