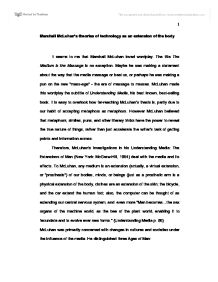 Marshall McLuhan's theories of technology as an extension of the body.

Marshall McLuhan's theories of technology as an extension of the body It seems to me that Marshall McLuhan loved wordplay. The title The Medium is the Massage is no exception. Maybe he was making a statement about the way that the media massage or beat us, or perhaps he was making a pun on the new "mass-age" - the era of message to masses. McLuhan made this wordplay the subtitle of Understanding Media, his best known, best-selling book. It is easy to overlook how far-reaching McLuhan's thesis is, partly due to our habit of accepting metaphors as metaphors. However McLuhan believed that metaphors, similes, puns, and other literary tricks have the power to reveal the true nature of things, rather than just accelerate the writer's task of getting points and information across. Therefore, McLuhan's investigations in his Understanding Media: The Extensions of Man (New York: McGraw-Hill, 1964) deal with the media and its effects. To McLuhan, any medium is an extension (actually, a virtual extension, or "prosthesis") of our bodies, minds, or beings (just as a prosthetic arm is a physical extension of the body, clothes are an extension of the skin; the bicycle, and the car extend the human foot; ...read more.

notion of existence, "I think, therefore I am." The Enlightenment theory further assumes that knowledge resides in the rationality of brain and because it is objective and independent, it is separate from our world and our bodies and is essentially disembodied. Our bodies are thus part of nature, which according to Enlightenment, is something to mechanize and have power over. This Enlightened point of view is the driving force behind the notion that "Virtual Reality" works of art facilitate a disembodied experience. These theories show the means of communication's effects originated from creative individuals' capacity to understand the perceptive changes, which came from technological effects over artists. Thus, McLuhan believes that the artist can solve disequilibrium problems made by the surfacing of a new mean. "The artist can correct the relations between feelings before new technology's impact put the conscious procedures to sleep." (McLuhan, 1964, p.86) According McLuhan's theory of three stages history, all societies and cultures can be distinguished on the basis of which media predominates (oral, print and electronic); oral societies are closed, static, communal and the ear is most important sensory organ; print societies are open, oriented towards progress, individualistic and the eye is the central sensory organ; electronic ...read more.

Gillian's exceptionally frank work provides a sober picture of some aspects of contemporary British life, although they could easily be extrapolated to most of western society. (Figure V-FigureVII) Therefore, McLuhan's identification of the formal elements of media, and consequent effects, illuminates the way media function as patterns of organization in our society. His emphasis on the human involvement and interaction with media illustrates how media organizes patterns of social practice and perception. Media disseminates information by converting data into forms of sensory stimulation, and the age of electronic media has created a social climate of increased media stimulation. Wearing depicts this relation between human beings and media technology as being an inevitable factor in the shaping of our consciousness. Media technology is indeed viewed as being a direct extension of man, which creates new and diverse experiences within the network of communication, therefore altering the terms of human experience. In the voyeuristic worlds of Gillian Wearing's videos human existence is situated within a structure of media technology that is indeed a part of our consciousness, and physical everyday existence. Resources http://www.geocities.com/namjunepaik/gallery2.html http://www.guggenheim.org/exhibitions/past_exhibitions/paik/paik_top.html Art In Context http://www.artincontext.org/artist/p/nam_june_paik/images.htm http://www.icaphila.org/exhibitions/wearing.php http://www.macm.org/salle_de_presse/detail.cfm?ID=75 Amelia Jones, Activating Otherness in New Media Art (http:// www.parachute.ca) Parachute 113, 2004 Searchlight (Consciousness at the millennium) California college of Arts and Crafts, 1999 http://www.gyroscopeinc.com/searchlight.html 1 ...read more.