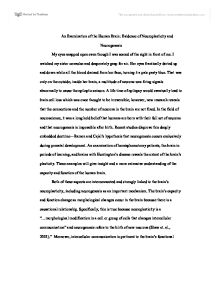 An Examination of the Human Brain: Evidence of Neuroplasticity and Neurogenesis

An Examination of the Human Brain: Evidence of Neuroplasticity and Neurogenesis My eyes snapped open even though I was scared of the sight in front of me. I watched my sister convulse and desperately gasp for air. Her eyes frantically darted up and down while all the blood drained from her face, turning it a pale pasty blue. That was only on the outside; inside her brain, a multitude of neurons was firing signals abnormally to cause the epileptic seizure. A life time of epilepsy would eventually lead to brain cell loss which was once thought to be irreversible; however, new research reveals that the connections and the number of neurons in the brain are not fixed. In the field of neuroscience, it was a long held belief that humans are born with their full set of neurons and that neurogenesis is impossible after birth. Recent studies disprove this deeply embedded doctrine-Ramon and Cajal's hypothesis that neurogenesis occurs exclusively during prenatal development. An examination of hemispherectomy patients, the brain in periods of learning, and brains with Huntington's disease reveals the extent of the brain's plasticity. ...read more.

However, in children, the intact hemisphere compensates for the lost hemisphere by performing some of its functions. The right hemisphere reorganizes and generates new connections between unharmed neurons via mechanisms like axonal sprouting, "...described as the detection of axon terminals in areas previously free of those types of axon endings (Woolf et. al., 1992)." In response to the hemispherectomy, the unharmed neurons grow nerve endings to connect with neurons that had damaged or severed axons to form neural pathways. Such pathways and neuroplasticity allow the intact hemisphere to take over other functions. In this case, neuroplasticity plays a healing role to compensate for injury to the brain; furthermore, neuroplasticity also responds to other situations like stimulus from the environment. Neuroplasticity is observed during periods of learning as the brain changes structurally. As an individual learns, the internal structure of existing nerve endings can change as the brain makes new links. The accumulation of knowledge is not possible without the memory; the hippocampus is a component of the brain that is responsible for long-term memory and spatial navigation (Parasuraman and Rizzo, 2008). ...read more.

Damage by HD acted as a catalyst for the formation of neurons to compensate for the dead brain cells. However, the rate of neurogenesis does not occur at a rate that would balance the loss of neurons. This study has provides evidence that cell death is a stimulating factor of neurogenesis and most of all, that neurogenesis is possible in adult humans. The analysis of hemispherectomy patients, the brain in periods of learning, and brains with Huntington's disease all demonstrate the neuroplasticity is a factual concept. Recent research not only refutes that postnatal neurogenesis is not possible, but it allows for a greater understanding of the relationship between the physiology of the human brain and its health and function. The study of neuroplasticity holds enormous potential; it can lead to treatments for stroke, post surgery therapies, or even cures for neurodegenerative diseases. The key to neurogenesis can possibly provide the key to many medicines in the future. Further study of neuroplasticity and neurogenesis will allow for a clearer understanding of the intricate and multifaceted adult human brain. The understanding of the brain's capabilities and features is the gateway for later scientific discoveries. ...read more.