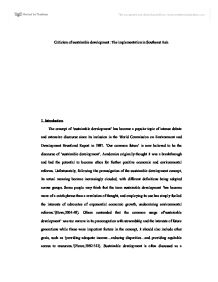 Therefore, economic equality is essential to achieve sustainable development. Sustainable development is also dependent upon balancing the interplay of policies and their effective implementation to achieve economic, environmental and social needs. Economic growth requires a secure and reliable energy supply, but it is sustainable only if it does not threaten the environment. Sometimes the policies are mutually reinforcing and sometimes they are in conflict and trades-off will often need to be made. Sustainable development is usually be considered as ideology as it originally appealed most to those preoccupied with the tendencies of capitalist development to deface the world in its haste to convert anything and everything into commodities which could be sold for a profit. Many advocates of sustainable development have seemed to reason within Western traditions that see humans as stewards of Nature, with responsibility for its care. As the environment is placed at the forefront of debate in western societies, increased attention has moved towards so-called 'global' environmental problems such as climate change and the protection of biodiversity. Some people even saw it as Western hypocrisy surrounding environmental issues and sustainable development and spoke of the sovereign right to exploit forest resources. The current universalistic sustainable development discourse does not yet encompass the distinctiveness of certain regional contexts or the specificities within those contexts and thus encounters problems during stages of implementation. Some radical activists even believed that 'there is no form of development, sustainable or otherwise, compatible with the health of Nature as a whole, including human beings within it.' On the other hand, anthropocentric critics believed that sustainable development has the danger of 'throwing the baby out with the bath water' which means that 'reject the essential with the inessential' or to destroy something good with something bad. 4. Sustainable development in the Southeast Asian context Southeast Asia is exemplary in displaying requirements for more 'sustainable' development methods and processes in the midst of the rapidity of political, environmental and economic change. ...read more.