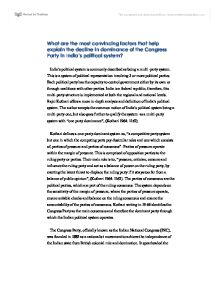 What are the most convincing factors that help explain the decline in dominance of the Congress Party in India’s political system?

India’s political system is commonly described as being a multi-party system. This is a system of political representation involving 3 or more political parties. Each political party has the capacity to control government either by its own or through coalitions with other parties. India is a federal republic; therefore, this multi-party structure is implemented at both the regional and national levels.

The Congress Party, officially known as the Indian National Congress (INC), was founded in 1885 as a nationalist movement to achieve the independence of the Indian state from British colonial rule and domination. It spearheaded the movement, which eventually culminated in India’s independence in 1947. Post-independence, the Congress Party became the dominant party in the electoral system, dominating the Lok Sabha, the legislative branch of the Indian government and the state assemblies. It also formed the first executive government with Jawaharlal Nehru as Prime Minister.

Over the years however, the Congress Party appears to be on a downward trend in terms of its electoral dominance and has even been ousted more than once from majority control of seats in the Indian Parliament.

This essay aims to critically assess the decline in the dominance of the Congress Party, a party that is more or less synonymous with the Indian state. It will explore various possible reasons for the decline in the party’s dominance, such as association of the party with its political leader, emergence of viable rival political parties and breakdown of the Congress Party into different factions, essentially reducing its political power.

It will also attempt to assess the nature of the decline of the party, as a political party control is measured by the percentage of political votes captured during elections. This measurement method might fail to depict the true nature of the dominance or decline. It focuses solely on one arena and in the Indian case, where corruption and election fraud is common case; dependence on such limited data might present a skewed analysis.

The Congress Party, as previously stated, developed as a nationalist movement to ensure the acquisition of an autonomous, sovereign Indian state, devoid of any control and intervention of the British government, of which it was formerly a colony. Post-independence, the Congress Party acquired a new role. As the dominant political party responsible for the first Indian government, it also had an obligation towards nation building. Kothari argues that in many respects, post-independence, the Congress Party continued to be a movement and not only a political party and evidence of this is present in its nation building objective, an objective which, “has determined many of the present characteristics of the Indian political system”, (Kothari 1964: 1167). Therefore, an extreme argument or conclusion could be that a decline of the Congress Party would also mean a decline of the Indian state as they can be described as one and the same, since the Congress Party was more or less responsible for its development. This points to the ambiguity of the term “decline”.

Figure 1: Percentage of total seats obtained by the Congress Party in the Lok Sabha and the State Assemblies in 1952, 1957 and 1962.

As illustrated in Graph 1, it is evident that the Congress Party in the early years of political governance in India was the dominant political party. It acquired at least 70% of votes in the Lok Sabha in 1952, 1957 and 1962. Its dominance was not limited to the national level. It was reflected also in state level assemblies, where although their dominance was not as strong as it was nationally, it was still a reckoning force. However, this trend of party dominance does not continue for the Congress party and from the late 1960s and early 1970s, there is a noted decline in their political power. Subsequent paragraphs will attempt to provide some explanation as to the reasons behind this potential decline in the political power of the Congress Party.

In the case of the Congress Party, its political leaders have had a greater impact on its organisation and development, to the extent that stages in its timeline are defined by the personality of its political leaders. Kothari argues that the nature of the post of the leader in the Congress Party is such that a lot of power in centralised in the singular position, which in effect weakened the political party. Evidence of this can be found even at its inception and beginning as a political party. Its first leader, Jawaharlal Nehru was Mahatma Gandhi’s appointed successor after his death. Therefore, he had a legitimacy, which although might have been personally objected, was publicly revered and declared both by the public and other potential competitors. The legitimacy wielded by Nehru served as both a blessing and curse for the Congress Party. It provided it with public approval and acceptance but in terms of its internal organizational structure, it proved, at worst, destructive.

Kothari states, “in a sense, the Nehru period was an exceptional period in India’s history, one that was so necessary, but not so normal. This had its effect on the working of the party system. While the congress gained in strength owing to factors described above, Nehru in another way weakened the party by concentrating power in his own hands and through acting as if only he could hold the country together”, (Kothari 1964: 1171). The impact of the leadership position on the Congress Party was not limited to Nehru. Although attempts were made to re-enforce the party’s internal organizational structure in the form of the Kamaraj Plan, the Congress Party continued to be manipulated and perceived in accordance with its leader; a trait, which has been both advantageous and harmful to the party.

Leading from the centralisation of power in the post of political leader, another potential reason for the decline in the dominance of the Congress Party could be the growing unpopularity of the party’s leaders and policies. A direct example of this is the regime of Indira Gandhi and subsequently her son, Rajiv Gandhi. The reign of Indira was a period, which saw the break-up of the Congress party, the institution of a state of emergency, (1975-1977), in which the military was frequently used to curb civil unrest or disobedience.  It was also a period in which the Congress Party, by nature of its political leader was associated with corruption and electoral malpractice. The Supreme Court of India declared the Premiership won by Indira in 1971 void in 1975 on the grounds of electoral malpractice, after being found guilty of misappropriating government funds for party campaigning. The illegitimacy and growing unpopularity of Indira’s government and effectively, the Congress Party was one shared by the Indian public and external speculators.

Figure 2 is a depiction of the measurement of the level of democracy of the India government since independence in 1947on an index with 10 being the highest level of a democratic state. During the reign of Indira (1966-1984), India experienced a fall in the index as a result of undemocratic use of power, authoritarianism and increasing levels of corruption in Indira Gandhi’s government.

The Congress Party did not suffer electoral decline and defeat solely based on the perception and popularity of its leaders. The development of worthy competitors to the dominance of the Congress Party also supported its decline.  The Janata Party formed during the state of emergency in India and its main successor, the Bharatiya Janata Party (BJP), which is currently a major political party in India and as of the most recently political elections, with 21.36% of the seats, is the main opposition to the Congress Party who has 37.94%.

The breakup of the Congress Party during the reign of Indira Gandhi and the internal political rivalries during this period was also another potential reason for its decline. One of the main appeals of the Congress Party was its ability to accommodate and absorb different political parties within its mandate. This was a tactic, which became established during the reign of Nehru, whose main political tactic was to assimilate conflict rather than suppress it. This tactic is in tune with the argument of Atul Kohli and the effect of a leadership strategy and the level of institutionalization of the state.  An extension of his argument could be that the be applied to the strategy adopted by Nehru, coupled with a relatively high level of institutionalization of the Congress Party, the outcome is inline with the author’s “inverse U” effect, wherein the demands of the opposition once assimilated into the ruling party, reduce.

Automatic assumption or supposition that the Congress Party has in fact declined should be avoided as the nature in which its decline has been measured could be contested. Majority of the data presented in preceding paragraphs indicate the decline of the Congress Party in terms of electoral votes. Measurement of the Congress Party based on a single source, a source which is not only limited, but also whose validity could also be questioned.

Furthermore, the use and focus on electoral data to determine the level of dominance or decline of a political party, in the case of the Congress Party, it would also prove to be insufficient. This is because, analysis of the data would present evidence supporting the dominance of the Congress Party as well as its decline, i.e., the most recent election figures saw the Congress Party acquiring majority of votes cast, in an era where it is claimed to be in decline. The data therefore is such that, depending on the interpretation, it can be manipulated to support either scenario as decline or dominance is a relative concept.

In conclusion, it is extremely difficult to assess the level of decline of the Congress Party in Indian national politics. It is a historical pervasive party that has been a constant source of admiration and disapproval. It has provided India with some of its most prominent Prime Ministers and is its longest standing political party. Therefore it would be inappropriate to use the term “decline” to define the state of the party. A more suitable term to define it would be evolving. As with most processes, the evolutionary process is a learning one with highs and lows, of which the Congress Party is no exception.

Atul Kohli, ‘Can Democracies Accommodate Ethnic Nationalism? Rise and Decline of Self-Determination Movements in India’, Journal of Asian Studies, Vol. 56, No. 2 (May 1997), pp. 325-344.

The Election Commission Of India, General Elections and Statistics:http://eci.nic.in/eci_main/index.asp, December 15, 2009.

[3] The Election Commission of India, (1977). Key Highlights to Election Results to the Lok Sabha.