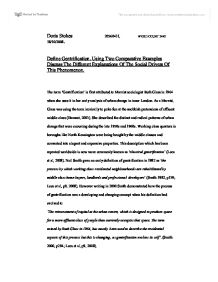 Doris Stokes 20560411, WORD COUNT 2442 18/10/2008. Define Gentrification. Using Two Comparative Examples Discuss The Different Explanations Of The Social Drivers Of This Phenomenon. The term 'Gentrification' is first attributed to Marxist sociologist Ruth Glass in 1964 when she uses it in her early analysis of urban change in inner London. As a Marxist, Glass was using the term ironically to poke fun at the snobbish pretensions of affluent middle-class (Hamnet, 2003). She described the distinct and radical patterns of urban change that were occurring during the late 1950s and 1960s. Working class quarters in boroughs like North Kensington were being bought by the middle classes and converted into elegant and expensive properties. This description which has been repeated worldwide is now more commonly known as 'classical gentrification' (Lees et al, 2008). Neil Smith gave an early definition of gentrification in 1982 as 'the process by which working class residential neighbourhoods are rehabilitated by middle class home buyers, landlords and professional developers' (Smith 1982, p139; Lees et al, p9, 2008). However writing in 2000 Smith demonstrated how the process of gentrification was a developing and changing concept when his definition had evolved to 'The reinvestment of capital at the urban centre, which is designed to produce space for a more affluent class of people than currently occupies that space. The term coined by Ruth Glass in 1964, has mostly been used to describe the residential aspects of this process but this is changing, as gentrification evolves its self'. (Smith 2000, p294; Lees et al, p9, 2008). 2 Here Smith is demonstrating that Glass's original definition had become to narrow and needed to adapt to be relevant and to reflect the highly dynamic concept of 'gentrification'. ...read more.

Manufacturing industries continued to vanish from the city landscape mainly due to economic pressures from cheaper imported goods. Service industry employment in areas like law, communications and insurance trebled, leading to significant changes in the composition of employment. This globalisation process has seen the migration of the manufacturing industries to relocate in places of cheap labour with the added advantage of also being emerging markets. Sassen arguing from a production perspective believes that there has been a march towards neo liberalism. The national and urban economies in advanced capitalist countries have been restructured away from manufacturing towards services, recreation and consumption. (Sassen 1991; Smith 1992). 6 David Ley prefers a consumption theory explanation for gentrification. He was strongly influenced by Bell's post industrialised thesis which predicted the growth in the service industry. Ley saw a new rationale developing over land use in post industrial cities. The expanding middle class have 'life' needs as well as economic ones. There consumption tastes and aesthetic outlook towards city life saw an 'imagineering of an alternative urbanism to suburbanization' which couldn't be captured by structural or production explanations (Ley 1996, p15; Panelli 2007, p53). New York underwent a surge in capital investment as office towers, apartment blocks, and existing units were upgraded. Land values near the city core soared and people who could no longer afford to live in Manhattan moved to less desirable parts of New York like Alphabet City. Alphabet City became a vibrant mix of Puerto Rican and African Americans living alongside wannabe actors, struggling artists and emerging musicians. The expanding bohemian population attracted by the low rents was synonymous with drug dealing and related crimes like prostitution and muggings. ...read more.

10 The argument for reduced crime rates is also contestable not least the argument that crime rates themselves are often flawed and open to political manipulation through the allocation of police resources. The job opportunities that are created are often low paid serving the new middle classes. The jobs will only be attractive to the people who can no longer afford to live in the area (Powell & Spencer 2003). The jobs may also be flexible and vulnerable to economic downturns. Recent turmoil in the world financial markets as sent property prices tumbling particularly in apartment blocks. The easiness of credit for buy to let investors has been a major driving force of redevelopment in many inner city areas. The new dynamics of financial lending will probably see the slowing down of the gentrification process in many parts of the world. Remember that Lees argued that it was the access to mortgage funds that kick started the initial gentrification in Barnsbury. 'Recessions and depressions ultimately require and allow spatial restructuring of the urban economy' (Lees et al 2008, p73). During this essay I have attempted to show that gentrification is a complicated but fluid phenomenon driven by complex social processes that are at times agreeable but often in conflict. Ideological positions differ and this can sometimes mean common ground cannot be found. Hammet and Smith's academic spat basically comes down to the structure versus agency argument and so is unlikely to be resolved. Whether you think that gentrification is a good or bad thing ultimately comes down to your own subjective opinions or experience. In there book on Gentrification the authors admit to having negative experiences which influenced their academic interest. 'Ultimately it is impossible to conduct research uncontaminated by personal or political beliefs' (Becker,1967 p240). ...read more.