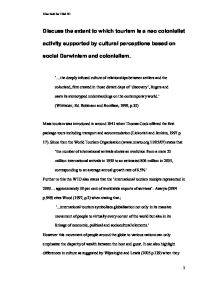 Discuss the extent to which tourism is a neo colonialist activity supported by cultural perceptions based on social Darwinism and colonialism.

Discuss the extent to which tourism is a neo colonialist activity supported by cultural perceptions based on social Darwinism and colonialism. '...the deeply infused culture of relationships between settlers and the colonised, first created in those distant days of 'discovery', lingers and casts its stereotyped understandings on the contemporary world.' (Whittaker, Ed. Robinson and Boniface, 1999, p.33) Mass tourism was introduced in around 1841 when Thomas Cook offered the first package tours including transport and accommodation (Lickorish and Jenkins, 1997 p. 17). Since then the World Tourism Organisation (www.unwto.org 11/05/07) states that 'the number of international arrivals shows an evolution from a mere 25 million international arrivals in 1950 to an estimated 806 million in 2005, corresponding to an average annual growth rate of 6.5%' Further to this the WTO also states that the 'international tourism receipts represented in 2003... approximately 30 per cent of worldwide exports of services'. Azarya (2004 p.949) cites Wood (1997, p.2) when stating that; '...international tourism symbolises globalisation not only in its massive movement of people to virtually every corner of the world but also in its linkage of economic, political and sociocultural elements.' However this movement of people around the globe to various nations can only emphasize the disparity of wealth between the host and guest. It can also highlight differences in culture as suggested by Wijesinghe and Lewis (2005 p.139) when they point out that; 'The tourism and hospitality industry brings together hosts and guests from a variety of cultures with different characteristics, expectations, and values.' It is this bringing together of host and guest that has possibly caused various authors (MacCannell, 1992, Nash 1977, Schiller1976, Cited in Saldanha 2002 p. 94) concern as to whether tourism has become a form of imperialism or colonialism. Australia is a perfect study for these points mentioned and special attention will be made to this country within this paper. ...read more.

Further to this, at the time of research there were no Djabugay employees in management positions. (ibid p.93). The case study also found that the Djabugay community had not only relinquished their rights to commercialise elements of their culture but also that the resources of the community had not increased or improved with the increase in tourism. The financial records were not accessible for the authors of the case study but it appeared that there had been no contractual dividends paid to the elders of the community. The authors also found that the majority shareholders in the park were in fact white, non-indigenous people with the Skyrail corporation and ATSIC (a government commission) holding 42.3% and another company holding 28.4% They (Dyer et al, 2003 p. 94) concluded with a final note that a subsequent newspaper article referred to Tjapukai Aboriginal Cultural Park achieving $7 million annual turnover. This case study illustrates extremely well how tourism can be seen as a force for neo-colonialism. The indigenous people are still being oppressed by the colonists; in this case the tourists and the majority shareholders, but this time they do not realise it. They believe that tourism is the way forward to improve their lives and that their culture will bridge the differences between them and the white man, when in point of fact, the white man is using their ignorance of the English language (Dyer et al, 2003 p. 84) to persuade them into signing their culture away with confusing contracts. Moreover, Henry (2000) wrote about the feelings of the indigenous people in that; 'Djabugay have ambivalent feelings towards the Park... Djabugay people know that they have been swept into a commercial venture over which, although they are now shareholders, they have little control.' Pilger (2002 p. 160) writes of the way that white Australia has appropriated the arts and artefacts of the Aboriginal Dreaming and indeed how the boomerang was adopted as the motif for the Olympic Games in Sydney 2000. He (op cit) ...read more.

54), whereby all nations believe that their own culture is better than anybody elses. However it could also be that the bringing together of hosts and guests with 'different characteristics, expectations, and values,' as suggested by Wijesinghe and Lewis (2005 p.139) is responsible for the treatment of indigenous peoples, in that people from a more civilised (as the West see it) country expect to have the basic necessitous of luxury, such as an indoor bathroom, and consider those that can do without as primitive. With regards to the power and dependency aspect that is engendered by neo colonialism, sex tourism has been utilised as an example to illustrate issue as suggested by Fennell (2006 p. 289) when he wrote about the power over children, women and families by dominant powers. This could also be regarded though as a separate issue in what people will do when social and legal norms are removed. Indeed, several governments encourage this kind of sexual tourism as illustrated by the Thailand government (Leheny, 1995 p.372) to improve their economy. It cannot be denied that certain types of tourism could be classed as a neo colonialist activity but it cannot be categorically stated that all tourism is based on this. Tourism can be used to support a failing economy in some countries. It can be used to educate people from different nations about the poverty suffered by indigenous people and also about the culture of indigenous people. There are many other things that can be criticised for the neo colonialist behaviours caused by Social Darwinism, such as globalisation and lending policies of the IMF that could be researched into at a later date. Unless all people stay in their home countries as suggested by Krippendorf (1987) then tourism is here to stay, and with it the various behaviours caused when host meets guest. A closing quote by Henderson (2001 p.235) exemplifies the final view of the matter. '...tourism can be a protector of culture and heritage and not necessarily the predator it is often portrayed to be. ...read more.