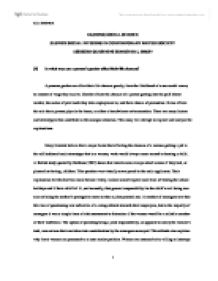 A persons gender can affect their life chances greatly, from the likelihood of a successful career, to amount of wage they receive. Gender affects the chances of a person getting into the paid labour market, the sector of paid work they take employment in, and their chance of promotion. It also affects the role that a person plays in the home, as either a breadwinner or homemaker. There are many factors and stereotypes that contribute to this unequal situation. This essay will attempt to explore and analyse the explanations.

Many feminist believe that a major factor that affecting the chances of a woman getting a job is the old fashioned male stereotype that to a woman, work would always come second to bearing a child. . A British study quoted by Giddens (1997) shows that interviewers always asked women if they had, or planned on having, children. This question was virtually never posed to the male applicants. Their explanation for this had two main themes: firstly, women would require more time off during the school holidays and if their child fell ill, and secondly, that general responsibility for the child’s well being was seen as being the mother’s prerogative more so than a joint parental one. A number of managers saw that this line of questioning was indicative of a caring attitude towards their employees, but to the majority of managers it was a simple form of risk assessment to determine if the woman would be a reliable member of their workforce. The option of parenting being a joint responsibility, as opposed to solely the women’s task, was not one that was taken into consideration by the managers surveyed. This attitude also explains why fewer women are promoted to a more senior position. Women are assumed to be willing to interrupt their career, no matter how high their position in the company, to look after, or have, children. This mindset is not helped by numbers that show the few women in senior management are without children and the ones are planning to have children plan to give up their jobs, with the thought of retraining for other positions as a possibility. A simple solution to combat this attitude can be found in a survey of women managers carried out in East Anglia (Verney, 1992 in Giddens, 1997:321). Close to all of the women surveyed mentioned the problems of childcare as the most difficult one facing women who wanted both a successful career and a family. The workplace nursery was named as the one area where the largest short-term improvements could be made, something only 2 percent of the companies surveyed provided.

Another factor affecting the life chances of a person on the basis of gender is explained by Taylor et al (2000:136) using the ‘supply side’ and the ‘demand side’. The ‘supply side’ of the explanation lists factors that limit the supply and quality of labour that has an inherent gender bias. Again, the expectation of childcare is mentioned. The old stereotype points to women as the bearer of all domestic responsibilities. However, as with all stereotypes, this does not mean it to be untrue. For many women, the home is where they find their greatest satisfaction and sense of accomplishment. For the women that do want a career, this image follows them and reduces their opportunities. When  suitable employment is found, women still have to manage the dual responsibilities of housework and their employment. A very insightful quote from Oakley (1979:393) cited in Taylor et al (2000:136) “Men and women cannot be equal partners outside the home if they are not equal inside it”, sums it up. The level of education and qualifications is another ’supply side’ factor. While girls are catching up to boys in their A Level results, females are also more likely to study arts subjects, as opposed to the males who tend to go for more technical, mathematical or scientific subjects. This would pose another possibility in which gender affects the chances of getting high status jobs. The ‘demand side’ explanations use features of the labour market that determine the increase or decrease in the demand for gender biased labour. Changing technology is a factor in this which affects the type of jobs available and the level of skill required. Yet again, the attitude of male employers play a large part in this. If he chose to recruit or promote through the ’old boys network’ this works to a great disadvantage to any female employee.

Once paid employment has been acquired, the inequality between genders continues. The most pervasive form being segregation, both vertically and horizontally. Taylor (2000:136) tells us that of the two forms of segregation, horizontal segregation is still the most visible. It describes the way that certain types of industries and occupations have a gender bias attached to them. The Equal Opportunities Commission (1990) states that men are over-represented in ‘primary’ sectors, such as agriculture, fisheries, construction, transport and energy. Whereas in the service industries, such as catering, hotels, finance and insurance, it is women are over-represented. Women are also over-represented in ‘other services’ which cover health, education, the public sector and in personal services (i.e. beauty, hairdressing). As is with any gender biased sector, the management looking to hire workers will, in general, hire workers that fit in the bias. The other form of segregation, vertical segregation, is defined by Taylor (2000:137) as “the way men and women are found at different jobs levels within each industry or occupational group”. He goes on to say that women usually form the majority at lower levels, and the minority at senior levels or at high status positions which are traditionally seen as ‘men’s jobs’. Surveys show that 80 percent of firms have an all male board of directors, and in British companies, less than 5 percent have female directors. These findings extend to many aspects of the economy. Giddens (1997:322) agrees with this stating that while around one million women work for major banks in Britain, National Westminster female directors only account for 2 percent, Barclays is 4 percent and 3 percent at Midland. Again it is this presumption of familial responsibility, as explained in the second paragraph, that prevents women from progressing to the top. It is this same presumption that endows men with the greater life chances that enables them to climb the career ladder with greater ease than their female counterparts.

The ways in which gender can affect a persons life chances does not end there. In addition to both vertical and horizontal segregation, there is also the large gap in the earnings of men and women. Even after the introduction of the Equal Pay Act (1970) which stated that it was illegal for men and women to be paid a different amount for doing the same job, this gap still exists. An improvement to this Act came in the form of the European Commission passing the Equal Pay Act in 1975. The new act was worded differently and was based on a ‘principal of equal pay’. It meant that not only should it be “the ‘same work’ but ‘work to which equal value is attributed’ should be paid equally” (Giddens, 1997:322). With both the Equal Opportunity and Pay Acts in effect, one would assume that the life chances of both man and women, at least in the paid labour market, would be equal. However, statistics gathered from the National Statistics Board Online show that, per hour, women in full time employment still earn 82 percent of the “average pay for all male full-time employees” (Grimshaw & Rubery, 2001:231). To look at this gap on a weekly basis, the divide increases further. As for part-time employees, this gap is even greater still. Grimshaw and Rubery (2001:231) state that women in part-time employment earn 60 percent of what men’s full-time rate per hour, and a mere 74 percent of the rate of women in full-time employment. In addition to this, women form the majority in the more poorly paid job sectors. Giddens (1997) tells us that female clerical workers are paid only 60 percent of what male clerical workers are paid. There is a similar discrepancy in the sales sectors where male employees earn almost 50 percent more than female employees.

The idea that gender divisions both at home and in greater society is ‘natural’, and women should fulfil the ‘biological destiny’ of their sex (Segal,1999 in Muncie et al (Eds.), 1999:307) impairs the parity of life chances. All life chances affected by gender stem from that one source; the expectation by society of women to manage two very different and very time consuming roles as both breadwinner and homemaker. While men, without the dual responsibilities can concentrate solely on their career. Heywood (2003:240) states that it is society’s expectation of women to stay at home, raise their children and look after the family home that most impairs a women’s life chances. Women may be mothers, but the responsibilities of motherhood do not have to be hers alone. A simple solution to this would be for domestic responsibilities to be shared equally between the man and woman. Once this understanding of shared responsibility filtered through all aspects of society by society the destruction of stereotypes that bias the life chances towards men would naturally follow. Resulting in a society where a person’s gender would in no way affect their life chances that contribute to the rise or fall of each individual in society.