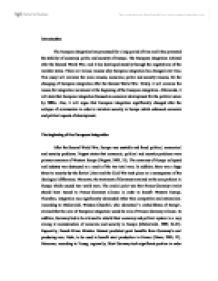 MaCormich argues that the gap between a common market and practical operations was wide. In the mid-1970s, the EC member states tended to protect their national markets rather than build an European market. Moreover, the solution was urgently needed for the effective common market due to the decline of European economy in 1980s (MaCormich, 1999, 176). Therefore, in 1986 the Single European Act established for a further development on the common market. Dinan mentions 'The Single European Act was the first major treaty change in the EC's history.' In addition, member states would cooperate more closely on the political and economic aspects of security (Dinan, 2005, 108). In addition, during the 1980s, three more states gained membership; Greece in 1981 and Portugal and Spain in 1986. It was a complicated decision to accept them, because as indicated by Gowland, Greece, Spain and Portugal were governed by authoritarian regimes until the mid-1970s and were economically undeveloped (Gowland et al, 2000, 166). However, their applications were successful mainly for political reasons. Nugent argues that the joining of new state would bring political stability in southern Europe and promote political and economic aspects of the Community (Nugent, 2003, 30). In addition, Pinder and Usherwood claim that the Community wanted these new member states for its projects on the Single European Act (Pinder and Usherwood, 2007, 27). Consequently, these states gained membership for political integration with economic elements. Deepening of European integration in relation to widening of the European integration A few years later, the sudden collapse of communism in Eastern Europe marked the most considerable point in the European integration history. ...read more.

1973 1981 1986 1995 2004 2007 Denmark, Ireland and the UK Greece Portugal and Spain Austria, Finland and Sweden Cyprus, Estonia, Hungary, Czech Republic, Latvia, Lithuania, Slovakia, Poland, Malta and Slovenia Bulgaria and Romania 33.4 3.7 17.8 6.3 19.6 4.8 31.9 1.8 11.0 6.5 9.1 1.5 99.5 48.4 103.6 29.4 29.8 Source: Michelle Cini, European Union Politics, 425 Conclusion As it is mentioned above, the first reasons for European integration were to bring security and economic development and economic growth focused by 1980s. It became a foundation for a further political union. In addition, as a consequence of the collapse of communism, for the EU, it was a great opportunity and responsibility to integrate the whole continent to maintain settlement of security. Consequently, the European integration has changed for economic, political and security reasons and each element has a cohesion in the process of European integration. Economic integration was for further political integration. In addition, the security in Europe has promoted the economic and political functions of the EU. From 6 members to 27 members, the EU has had a various reforms and institutional changes, but it is in doubt whether the EU will be willing to accept more applications, such as from non-EU Western European countries, the Balkan States and Turkey. In addition, social issues such as immigration, crime, wealth and European citizenship have been more emphasised recently and it will more affect on European integration in the future. Essentially, European integration will be more varied and complex than it has progressed and achieved over time. ...read more.