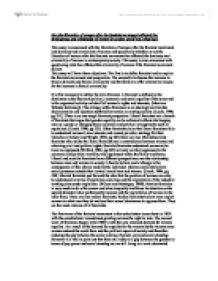 Has the liberation of women after the feminist movement affected the deviousness and criminality of women in society and if not, what has?

It also strongly contradicted the pathological explanations of female criminality prevalent in the preceding century (Freda Alder, 1975, pg 125) Alder (1975) predicted that increase in female offending was due to the emancipation of women and their growing participation in the workplace. The feminist movement gave women liberation and choice and brought about progressive changes in status for women in areas such as the family, the workplace and the political sphere and social position. (Wilson and Montague, 1999, pg 101) Before the women's liberation women had the same aspirations as men but like an oppressed class, lacked the power to obtain their goals by legitimate means. Woman had to seek status through men by conforming to the male definition of femininity (Alder 1975) the liberation of women had removed restrictions on women's behaviors and opportunities as they no longer had to conform to male definitions of femininity and therefore gave them more opportunities for crime. As women started to become more equal to men they started to become as criminal as men. With new deals such as the Abortion Act 1967 women were given the choice to rid of unwanted pregnancies and choice and the biological gap between men and women closed a little more thus giving women more opportunities for crime. ...read more.

Most explanations of the gender gap in crime draw on an accepted difference between males and females such as dominance aggression, physique and nurturance. Explanations to why more males commit crime points to female socialization, which tends to be characterized by greater parental supervision, more stress on conformity and fewer opportunities for crime. Those females who do deviate are viewed as having not only rejected societies rules but the traditional female role too. These women are described as showing double deviance. (Hodensohn 1995) Psychologists Lombrosso and Ferrero (1985) suggest tht criminal women are rare, but those who have not been neutralized by maternity are likely to become worse criminals than men. Criminology has notoriously ignored the issue of gender instead offering universal theories of crime based on stuff=dies which has relied only on male subjects. This makes it hard to discuss what exactly is making women more criminal. There a range of different ideas to what has affected the criminality and deviousness of women. However with out the feminist movement women would not have the life choices and freedom they have today and therefore it is fair to say that the feminist movement helped give women choice which led to them at least having opportunities for crime. This essay has given explanations to what has affected the criminality of women since the liberation of women. ...read more.