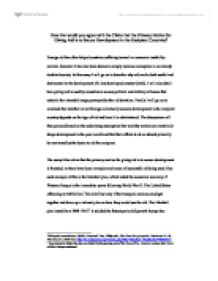 How Far would you agree with the Claim that the Primary Motive for Giving Aid is to Secure Development in the Recipient Countries?

How Far would you agree with the Claim that the Primary Motive for Giving Aid is to Secure Development in the Recipient Countries? Foreign aid has often helped countries suffering turmoil or economic instability recover, however it has also been shown to simply increase corruption in an already troubled society. In this essay I will go on to describe why aid can be both useful and detrimental to the development of a less developed country (LDC). I will also detail how giving aid is used by countries to secure political and military alliances that underlie the intended image portrayed by the aid donation. Finally I will go on to conclude that whether or not foreign aid actually secures development in the recipient country depends on the type of aid and how it is administered. The discussions will thus proceed based on the underlying assumption that wealthy nations can materially shape development in the poor world and that their efforts to do so should primarily be motivated by the desire to aid the recipient. The essay titles claim that the primary motive for giving aid is to secure development is founded, as there have been examples and cases of successful aid being used. One such example of this is the Marshall plan, which aided the economic recovery of Western Europe in the immediate years following World War II. The United States offered up to $20 billion1 for relief, but only if the European nations could get together and draw up a rational plan on how they would use the aid. ...read more.

Aid to Africa from developed countries has increased dramatically between 1970-1995; it has reached almost $1 trillion in the last 50 years5. This huge aid investment though has not delivered the positive changes it promised and in some cases can be said to have been counter productive to the long term stability of the relevant countries. In 1995 aid dependency6 was almost 20 % in Africa and the amount of aid as a share of government expenditure was up to 50% 7. This shows a dependency on aid that is unfeasible to sustain or replace should the aid be redirected elsewhere. During the period of sustained aid growth in Africa gross domestic product (GDP) fell, and for some years even fell into negative figures. There are no concrete links between increased aid and economic growth. Foreign aid is possibly only one aspect that has to be considered when trying to stimulate growth and development in a LCD's, but it is not the overriding factor. Aid must be linked to good economic policy from the government in power for it to positively affect growth. Another reason why aid can be counter productive to the development of a country is that it is very often spent on the incumbent ruler and for his personal gain rather than that of the country. Paul Rosenstein-Rodan, a former deputy director at the World Bank Economics department when he said, supports this claim "When the World Bank thinks it is financing an electric power station, it is really financing ...read more.

If the gap between the developing and the rich continues to grow, tensions in the world will go on increasing, with adverse affects for all nations."12 This view that helping the poorer nations is done for the good of the donor as well as the recipient, I think quite succinctly demonstrates most nations approach to aid donation. In conclusion I tend to disagree with the notion that the primary objective of giving aid is to secure development in the recipient country. Most aid is given with the intention of receiving some reward in return. These are often intangible goods such as political relationships and alliances, however sometimes increased trade between the recipient and the donor can be a factor. Also I do not believe that in some cases donor nations even believe that their money will be spent on projects harbouring development and growth anyway. A lot of the time the aid will just get used or spent on the leader, on prestige items such as statues or shrines. It is because the aid doesn't seem to be helping growth in poorer countries that new solutions need to be found. Indeed, other courses of action such as giving poor nations more control over economic policy, financing new development-friendly technologies, and opening up labour markets could have more significant benefits. It is time to direct the attention of the world's wealthiest countries to other ways of helping the poorest, ways that have been for too long neglected. ...read more.