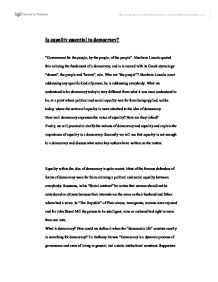 Is equality essential to democracy?

Is equality essential to democracy?

this as being the fundament of a democracy, and is in accord with its Greek etymology:

“demos”, the people and “kratos”, rule. Who are “the people”? Abraham Lincoln is not

addressing any specific kind of person, he is addressing everybody. What we

be, at a point where political and social equality was far from being applied, unlike

today, where the notion of equality is more attached to the idea of democracy.

How well democracy expresses the value of equality? How are they linked?

Firstly, we will proceed to clarify the notions of democracy and equality and explain the

importance of equality in a democracy. Secondly we will see that equality is not enough

to a democracy and discuss what some key authors have written on the matter.

Equality within the idea of democracy is quite recent. Most of the famous defenders of

everybody. Rousseau, in his “Social contract” he writes that women should not be

whom had a voice. In “The Republic” of Plato slaves, immigrants, women were rejected

and for John Stuart Mill the person to be intelligent, wise or cultured had right to more

What is democracy? How could we define it when the “democratic life” consists mostly

in searching for democracy? To Anthony Downs “Democracy is a dynamic process of

governance and even of living in general, not a static institutional construct. Supporters

of democracy must continue to change its specific meanings and forms.”[1] He writes that

democratic. Throughout the history of democracy there have been many restrictions to

who can or not vote, who can benefit from it or not, who is a citizen and who is not.

In ancient Greece, where democracy was first established, only a minority benefited

from that system, you had to have an education, land, be fully Athenian, wealthy; you

had a voice if you came from a certain background. The rest were the majority,

immigrants, slaves, and woman. Democracy at its beginnings had a purely political

meaning and no form of philosophical or social ideal, unlike today where the notion of

the Declaration of Human Rights and Citizens.

Germany. It’s pure hypocrisy. If the principle of equality is ignored a democracy cannot

be applied, they are bound, in a democracy we are meant to be equal in rights, in power

and responsibilities.  Equality is right, but to what extent? It’s a principle for which

many people have sacrificed their lives because it’s just; the fact that human beings are

humans is a relevant ground for equal treatment. The French revolution has been a key

event to what we understand to be a democracy today, under an absolute monarchy and

an oligarchy, 97% of the French population was struggling to survive each day and

inequalities that had no ethical justification whatsoever. This is to say that the notion of

equality is very linked to the notion of justice.

There is an important clarification to be done: equality is not the desire to eliminate the

existing differences between human beings, we would then be talking about uniformity.

What kind of equality could we want in a democracy? There are many: equality in

power, in consideration of interests, “equal well-being”[2], equality of opportunity,

juridical equality, etc... Equality does not have the same meaning to everyone; it

withholds various discourses and political reflexions, it’s an ideal; an objective we have

that motivates our actions and founds ideologies. The “perfect equality” could be one

by all, opportunities are to be equal, and goods are to be distributed equally.” [3] Equality

in opportunities is one of the main social issues today all around the world. It’s the idea

that everybody should be given since the beginning, the same chances to pursue

happiness regardless of their background. This does not mean that we will all succeed

but it’s a fair idea, it’s by one’s merit that you achieve what you have; merit playing a

“equal opportunity to be unequal”[4]. A system based on the notion of equity. This is the

fundament of what is denominated as meritocracy, a system where you must give equal

creating a system of “fair” inequalities.

respected we have to part from equality in rights, we are all equal to the eyes of the law.

Equality is then necessary to the application of rights in a democracy. But then again,

problem that many philosophers have pointed out: classes. This is the main obstacle to a

and therefore influential in the political sphere are likely to be so, thanks to the fact that

they exercise the kind of power that enables them to acquire such goods for themselves.

not, enjoy the power which comes from ownership of the means of production”[5]

Important philosophers such as Rousseau or Marx, have agreed that the abolition of

classes is the only coherent content of the idea of equality. For Rousseau a “democracy

presupposes a classless society”[6]. For instance, Engels wrote “The real content of the

proletarian demand for equality is the demand for the abolition of classes. Any demand

for equality which goes beyond that, of necessity passes into absurdity”[7]

What type of equality is most essential to democracy? Probably equality in power. The

equal consideration of interests. It overcomes and can mend all the other ones. Though,

distribution of material goods, inequalities of wealth are usually created by inequalities

in power rather than the contrary. Karl Marx proposed in his “Critique of the Gotha

community”[8]. The communist ideology takes very much into account the principle of

equality with the idea of common provisions, which in a democracy is equivalent to the

welfare state. Egalitarianism is indeed an attractive “system” as if the ideal of equality is

within its essence, but it’s the word that is attractive, in practice it would not make

people happy, a form of egalitarian society was for instance the USSR. Its inhabitants

were unsatisfied, poor, alcoholic, because it was a system that sacrificed individual

freedom for the sake of equality where the people had no motivation. F.A. Hayek, an

anti-egalitarian, wrote that all men are not born equal, and that their differences are the

most distinctive facts about the human specie. He only agrees with equality before the

law and rejects any other attempt of it, of what he calls “material equality”[9]. Are there

democracy also attached to equality, is one of our dearest values: freedom.

“Freedom, as understood here, is a matter of giving people a say in political decision-

making […] Equality lies in this freedom being given to all.” Freedom and equality are

way to put them together in harmony. In society we are free to do whatever we want

except, of course, what you would not like to be done to you, the fact that there are

rights and laws are to secure our freedom in the what Rousseau calls the “civil society”.

the law. The main idea in law, in its essence and for its execution, is equality. Law is a

field of morality. It is meant to tell us what is wrong and what is right, who is wrong

and who is not, its a neutral body dedicated to find the fairest judgement. In a

democracy, equality and freedom are encouraged and can be compatible but if there is

too much of one, the other one disappears i.e. the case of the USSR, where the system

“uniform”; or the other way round, contemporarily in the United States of America

freedom is very much valued, its at the heart of the idea of pursuit of happiness and the

American dream. But the fact that freedom is so central and privileged in the American

people. In the case of France, there is a big debate as for religious signs, for example, at

a French public school you are not allowed to wear any object that reveals your religion.

Why? Because it leads to more discrimination, you are less free if somebody comes and

bullies you for religion then if you just decide to hide that cross, or hand of Fatima

under your t-shirt. That is an example of sacrifice of our freedom of thought and

expression for the sake of equality, because the consequence of not showing that object

then if you do show it. Another interesting point in achieving equality in democracy is

the creation of what is called “affirmative action” or “positive discrimination”, these

kinds of laws are made to promote equality in society, for instance, in France at a very

government because the university will receive also a benefit for accepting that student.

In what way does this promote equality? It promotes equality in opportunities.