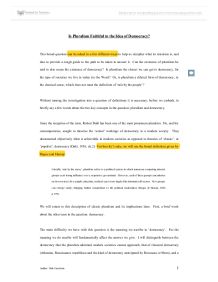 Is Pluralism Faithful to the Idea of Democracy?

Is Pluralism Faithful to the Idea of Democracy? This broad question can be asked in a few different ways to help us decipher what its intention is, and also to provide a rough guide to the path to be taken to answer it. Can the existence of pluralism be said to also mean the existence of democracy? Is pluralism the closest we can get to democracy, for the type of societies we live in today (in the West)? Or, is pluralism a diluted form of democracy, in the classical sense, which does not meet the definition of 'rule by the people'? Without turning the investigation into a question of definitions it is necessary, before we embark, to briefly say a few words about the two key concepts in the question: pluralism and democracy. Since the inception of the term, Robert Dahl has been one of the most prominent pluralists. He, and his contemporaries, sought to theorise the 'actual' workings of democracy in a modern society. They documented objectively what is achievable in modern societies as opposed to theories of 'classic', or 'populist', democracy (Dahl, 1956, ch.2). For brevity's sake, we will use the broad definition given by Hague and Harrop: Literally 'rule by the many', pluralism refers to a political system in which numerous competing interest groups exert strong influence over a responsive government. ...read more.

features of democracy: citizenship rights, including one-person-one-vote, freedom of expression, freedom of organisation; a system of checks and balances between the legislature, executive, judiciary and administrative bureaucracy; competitive electoral system with (at least) two parties (Held, 1996, p.217). So, can pluralism fly the flag of the most relevant, accurate and sensible path to running a modern, industrial society? Do Dahl's ideas and observations in the 1950s and 1960s still hold true today? Do we live in a pluralist society (in the West)? The answers to these questions can help us tackle the question of pluralism's faithfulness to democracy. Keeping in mind the classic pluralist theory and our question I will now consider some criticisms of the theory, which ultimately detract from the notion that pluralism is faithful to democracy. From the late 1960s through to the present there have been a number of economic, social and political crises that have inevitably led to the questioning of classic pluralist thought (Dunleavy & O'Leary, 1987, p.271-2). The major doubt of pluralist thought is its inability to deal with any change away from the world as it stood in the 1950s and 1960s. The 'empirical' nature of pluralism, and its 'realistic' description of society, has made it difficult for pluralist's features to be cast into shape with the changing mould of the political arena. ...read more.

And, if you are sure that pluralist versions of democracy are inimical to a true sense of the word then you could well fall into the 'unfaithful' camp. In my own opinion it appears extremely important to discuss pluralism contextually, historically and without reversion to simply 'describing' society. If pluralism is taken to be faithful to democracy, in that it is the best way of running society, then it will always be an easy target for criticism. This is because of the wider, more complex nature of modern, capitalist societies outside of the purely decision-making, political sphere. The type of society necessary for pluralism to be in its prime, could easily be argued to be impossible to exist. In the words of Mr Pluralism himself, encapsulating the fundamental reason for championing pluralism, and the fundamental problem with it: PLURALIST: ...If the notion of citizen virtue and common good are to be relevant to the modern world, we have to situate them in the context of polyarchy and the pluralism that accompanies it. Wouldn't you agree, Traditionalist? TRADITIONALIST: Within limits. I might draw the conclusion that polyarchy and pluralism are inherently inferior to the polis, and we should therefore do what we can to restore the polis. You give me all the more reason to prefer the past and reject the present as the model for the future (Dahl. 1989, p.289). ...read more.

This is a very thoughtful essay with a good amount of independent insight. This is certainly an essay towards the higher end of the scale (60+) and so the comments below should be taken in this light.

1) Structure. This essay could do with a clearer narrative structure and more consistent use of paragraphs. As it is, the short paragraphs and quotes seem like mini-insights that don't quite go anywhere. It is a bit confusing and interferes with the overall flow of the argument. Likewise, I am not sure that there is enough successiveness in the argument. Certain points are made in the conclusion which build upon ideas at the start of the essay - they should really be in one place.

2) Thematic frameworks. Marxism and Elitism are mentioned, but not in a particularly complete way. Their criticisms should probably be more integral to the essay. Likewise, the essential tension over directionality is never really considered - whilst pluralism and democracy may be sensible bedfellows, plenty of authors describe elitism as a compatible description of democratic societies. It may be unfaithful to the spirit of democracy but it is not inimicable to its functioning. I think whether one is dependent upon the other is an idea that is hinted at, but not fully resolved.

3) Definitions. Although the author does provide us with definitions of pluralism and democracy, I am not sure that these are comprehensive as they need to be. For instance, a major problem with pluralism is that it is both normative and descriptive, a tension that I don't think is ever fully expressed in the essay. Likewise, the distinction between 'classical' and 'modern' democracy - on which the author relies to make an argument about more/less faithful pluralism - is never completely spelt out.