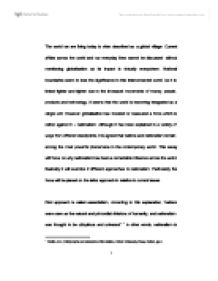 Nationalism. This essay will focus on why nationalism has been a remarkable influence across the world. Basically it will examine 2 different approaches to nationalism

The world we are living today is often described as a global village. Current affairs across the world and our everyday lives cannot be discussed without mentioning globalisation as its impact is virtually everywhere. National boundaries seem to lose the significance in this interconnected world. As it is linked tighter and tighter due to the increased movements of money, people, products and technology, it seems that the world is becoming integrated as a single unit. However globalisation has boosted or reassured a force which is rather against it - nationalism. Although it has been explained in a variety of ways from different standpoints, it is agreed that nations and nationalism remain among the most powerful phenomena in the contemporary world. This essay will focus on why nationalism has been a remarkable influence across the world. Basically it will examine 2 different approaches to nationalism. Particularly the focus will be placed on the latter approach in relation to current issues. First approach is called essentialism. According to this explanation, "nations were seen as the natural and primordial divisions of humanity, and nationalism was thought to be ubiquitous and universal."1 In other words, nationalism is inborn phenomenon rather than created or manipulated one. People innately have a desire for belonging as could be seen from lifestyle based on tribal units in pre-modern societies. ...read more.

The role of tradition in shaping nationalism is crucial in a sense that the central features that drive nationalism are common memories and amnesia. By sharing common memories and amnesia which represent the key events in the history of a particular political community, people feel secured with a feeling of membership. This feeling of security naturally motivates people to pursue common future in a belief that this will ensure their lives to continue without facing any unexpected threats. This explains how national project can be done successfully by giving new meaning and significance to its people. For example in the case of South Korea which had achieved significant economic development during 1970s, one of the key factors that motivated its people was 'being better' than Japan. Sharing painful historical experience made the society more cohesive to reach its goal. However Gellner also argues that "nationalism is primarily a political principle, which holds that the political and the national unit should be congruent."5 What is meant here is that nationalism would be prosperous when the power of governance does not exist within its national unit or threatened by external forces. Thus, the desire for sovereignty and self-determination are considered to be a necessary condition for nationalism. However it is not everything. ...read more.

Having said that nationalism appears when the governance unit and the nation are not congruent, globalisation definitely has something to do with increased nationalism at minimum. In this way, in this global era where the competitions as well as dependence among countries is taking place, nationalism is more likely to be used either in a desirable way or destructive way by national leaders. As long as a nation remains as a fundamental unit in dealing with global affairs like what it is now, the force of nationalism would rather be promoted than vanishing. To conclude, given that nationalism has changing face depending on by whom and how it is activated, there cannot be a single explanation for it. Different explanations stem from different standpoints in economic, political and cultural arenas. Fundamentally it is crucial to understand nationalism as a mixture of two attributes: the political aspect which derives from the belief of congruence of the political and national unit and the cultural aspect which derives from people's desire for belonging to the community. One way or another, either nationalism is a modern or primordial phenomenon, it has been existing in people's consciousness (or unconsciousness). Despite the massive wave of globalisation, it is said that "as long as any global order is based on a balance of competing states, so long will the principle of nationality provide the only widely acceptable legitimation and focus of popular mobilization. ...read more.