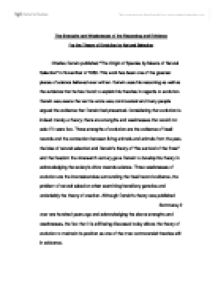 The Strengths and Weaknesses of the Reasoning and Evidence

The Strengths and Weaknesses of the Reasoning and Evidence

For the Theory of Evolution by Natural Selection

Charles Darwin published “The Origin of Species by Means of Natural Selection” in November of 1859. This work has been one of the greatest pieces of science believed ever written. Darwin uses his reasoning as well as the evidence that he has found to explain his theories in regards to evolution. Darwin was aware the text he wrote was controversial and many people argued the evidence that Darwin had presented. Considering that evolution is indeed merely a theory; there are strengths and weaknesses that would not exist if it were fact. Three strengths of evolution are the evidence of fossil records and the connection between living animals and animals from the past, the idea of natural selection and Darwin’s theory of “the survival of the fittest” and the freedom the nineteenth century gave Darwin to develop his theory in acknowledging the society’s drive towards science. Three weaknesses of evolution are the inconsistencies surrounding the fossil record evidence, the problem of natural selection when examining hereditary genetics and undeniably the theory of creation. Although Darwin’s theory was published

over one hundred years ago and acknowledging the above strengths and weaknesses, the fact that it is still being discussed today allows the theory of evolution to maintain its position as one of the most controversial theories still in existence.

The fossil record is one mean of evidence that shows how evolution is occurring (Shermer 9). The fossil record shows an eventual change in the remains of species. There are similarities that can be found between Neanderthals and primates. They both have opposable thumbs which are necessary in picking up objects or to prevent the species in using their hands when they are walking upright. The opposable thumb makes humans and apes and other species of similarity some of the handiest in the world. While looking at fossils Darwin also noticed similarities between land, swimming and flying animals. An example of this is the Pentadactyl Limb. This is a homologous structure which can be found in humans, cats, bats and whales. During Darwin’s Voyage on the Beagle, he came across the Galapagos Islands. He not only noticed that species on the Galapagos Islands varied from pervious islands but that species varied with on the island itself. While observing tortoises, Darwin noticed similarities as well as differences that the tortoises possessed. Different characteristics that these creatures had were, shell shape, size and colour. These characteristics were all similar but had taken on slight changes as if they had made an adaptation. Darwin also noticed similarities and differences found in a group of birds. These birds are

more famously known as Darwin’s finches. Like the tortoises, the finches had a lot of similarities but also varied in size and shape, colour, and had cosmetic differences such as beak shape. Fossils found in an area are usually pre-decedents to species currently living there.

There are still gaps in the fossil record, even though it is more complete then when Darwin published his theory (Barton 73). Darwin’s rebuttal for this argument is not everything fossilised and that is why there are large gaps (Shermer 8). There is also the movement of plates to consider. Fossils could have fallen off of the earth’s plates during plate movement. The fossils could now be located on the ocean floor. Palaeontologists can not prove that every part of the earth has been dug up; therefore how do we know that there are not fossils still out there? Even though scientists can be sure or even really sure, it is not inclusive. Consider situations of missing people. Even though their remains have not been discovered this does not mean they did not exist. There are many believers that argued Darwin’s theory of evolution. One argument that was presented was fossils show no changes (Barton 78). This can be argued by saying that changes happen gradually; there is no way to go back into time and prove that these animals existed or what they may have looked like. We can only make a calculated guess. Fossils are also found individually. In order to notice changes there needs to be more then one of each species available for comparison. The species need to be spread out amongst different environments for noticeable changes

to take place. Another argument is that Earth is not old enough to go back as far as the fossils do (Barton 73). There also has not been a drastic fossil or structure change in the last couple of hundreds of years. The breaks in the fossil record could be due to natural selection, Darwin’s theory of survival of the fittest.

Darwin’s theory of natural selection and “survival of the fittest” came to him after reading an essay. This essay was written by Thomas Robert Malthus in the nineteenth century and was called “Essay on Population” (Barton 17). In this essay Malthus stated that disease, starvation and homelessness were all due to the fact that there are not enough supplies to survive (Campbell 258). If there were enough supplies for all species to survive, earth would become overpopulated. Darwin decided to pursue Malthus’ thoughts and seeks an explanation for the reasoning that plants and animals need to change in order to survive (Browne 43). Darwin thought that if each species adapted slightly they could better accommodate themselves. Natural resources are limited and will eventually run out. An example of an adaptation is found in giraffes. The neck of the giraffe is incredibly long and serves no other purpose then reaching for its food from tree tops. If a giraffe were to have a short neck, it could only reach the lower branches. Most of these branches would no longer have leaves on them because other animals would be able to reach and eat all the lower leaves. Another example of an adaptation is the peacock’s tail. The only known purpose for the peacock’s tail

is to attract a mate necessary to reproduction. “Survival of the fittest” comes from the fact that there are limited resources and therefore always a competition for these resources.

Darwin argues that adaptations need to take place in order to survive in an environment with limited resources. However, this is not true in humans. If there is a useless trait that a human possess it cannot be simply eliminated. Genes are a heredity unit that consists of a DNA sequence that makes up a particular characteristic in an organism such as humans. Genes emerge every few generations and cannot be eliminated. Unlike a giraffe’s neck, natural selection cannot be applied to the human race at least not in physical terms such as Darwin states. Darwin presented his document during the nineteenth century. He could not have picked a better time to do so. The nineteenth century was time period when technology and science took off. Because people during this time grew up in a Catholic church, they were more accepting to Darwin’s idea of evolution. The presentation of this theory gave people an opportunity to believe in something besides the church. It was also during this time that many “science based” works were published. “Frankenstein” by Mary Wollstonecraft Shelly, was written in 1818. It is in this novel that Dr. Victor Frankenstein makes a manlike creature that is both larger and stronger then the average human. This “monster” was created by a human. Which lead the people in the nineteenth century to think that maybe there was not a God, seeings how in “Frankenstein” a human created another

human-like creature. This book has a lot of science references, which was appropriate during the science era. Many new discovers where being made during this time period. It was also during this period that Alexander Graham Bell invented the telephone and Thomas Edison invented the light bulb. These are both huge inventions that affect our lives today. Because there were so many new discoveries and inventions taking place during this time period, people began to adapt and have a better understanding of new ideas. Catholic churches however, were not so fond of these new ideas regarding the creation of earth.

Creationism is the belief that God created earth and all things on it. The book of Genesis states that, God created the Earth. Once that task was complete, He then asked for light and then there was light. When God had the light He needed He wanted water. The creatures He was about to create needed this substance in order to survive. And so then there was water. At this point, he decided that earth needed vegetation and there vegetation appeared. God then filled his new creation. He put creatures in the water, birds in the air and animals on the land. God then decided to put humans on the earth. God made a replica of him and placed it on the land. He put the man to sleep and while he was sleeping he took one rib. From that one rib of the man a woman. And then God left them. God told them to multiply and fill the earth (Genesis 1:1-2:25). I don’t know how you can argue with the bible. The bible is the greatest story ever told and has been around for centuries.

Darwin himself was a believer of the bible. His wife and he read it every night. Although it goes against his own theory, Darwin was a Catholic himself and therefore had the bible as an influence in his believes.

Darwin’s theory published was over one hundred years ago is still being discussed today. The fact that it is still being discussed allows for the theory of evolution to maintain its position in Science History. Darwin believed that the strengths for his theory are, the evidence of fossil records and the connection between living animals and animals from the past, the idea of natural selection and Darwin’s theory of “the survival of the fittest” and the freedom the nineteenth century gave to Darwin helped develop his theory in society’s drive towards science. Three weaknesses of evolution that Darwin faced were the inconsistencies surrounding the fossil record evidence, the problem of natural selection when examining hereditary genetics and the theory of creation. Darwin’s theory of evolution will remain a theory forever or until it is proven false. Although the evidence and reasoning Darwin uses is very convincing, I am still a believer in the book of Genesis. I have grown up with the belief that God created everything. The bible is centuries old and because of this I feel it cannot be argued.

Shermer, Michael. Why Darwin Matters: The Case Against Intelligent Design.