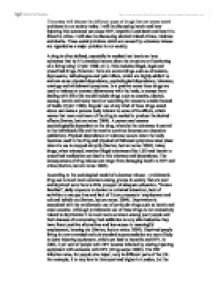 This essay will discuss the different types of drugs that can cause social problems in our society today. I will be discussing heroin and how injecting

This essay will discuss the different types of drugs that can cause social problems in our society today. I will be discussing heroin and how injecting this substance can cause HIV, hepatitis's and death and how it is linked to crime. I will also be discussing alcohol related crimes, violence and deaths. These social problems which are caused by substance misuse are regarded as a major problem in our society. A drug is often defined, especially in medical text books as 'any substance that by it's chemical nature alters the structure or functioning of a living being' (Tyler 1988: p11). This includes illegal, legal and prescribed drugs. However, there are several drugs such as stimulants, depressants, hallucinagens and pain killers, which are highly addictive and can cause physical dependence, psychological dependence, tolerance, cravings and withdrawal symptoms. In a positive sense these drugs are used to balance or connect disharmony with the body, to escape from dealing with life (this would include drugs such as cocaine, alcohol, ecstasy, heroin and many more) or searching for answers outside instead of inside (Tyler: 1988). Regular use of any kind of these drugs stated above can make a persons body tolerant to some of its affects, which means that more and more of the drug is needed to produce the desired effects (Barton, lecture notes: 2004). ...read more.

Blair's calculations worked on the assumption that 22,819 'notified' addicts were each consuming one gram of heroin a day priced at �80 a gram. This worked out at an annual consumption per addict of �30,000 because stolen property can only be sold for around a third of it's as-new value, the addicts each had to thieve not �30,000 worth of items but �90,000 worth (Tyler 1988: p14). However, there are some chronic drug users who are committing crimes not to fund their habit but to get themselves arrested and imprisoned simply to get access to treatment. The development of drug treatment and testing orders (DTTO's) has been so effective in parts of Britain that they are seen by desperate drug users as the only way to get treatment (Travis, June 28 2004). The DTTO is used for offenders who have drug misuse issues that require treatment under the crime and disorder act 1998. The offender must agree to undergo treatment and an intensive supervision programme for their drug problems and offending behaviour as well as taking regular tests for drug use. This treatment could last between six months and three years, which is supervised by the probation service (Maguire et al: 2002). An offender sentenced to a DTTO will undergo treatment and a supervision programme which is expected initially to be for twenty hours a week, and to have their progress reviewed regularly by the courts (Maguire et al: 2002). ...read more.

In conclusion, we can see that drugs brings about many social problems. For example, Heroin users especially people living in over-crowded and sub-standard accommodation are more likely to share injecting equipment, which can lead to hepatitis and HIV. A total of 121 people acquired the HIV infection through injecting drug use during 2003. At the end of 2004, a total of 4,202 people had acquired HIV by this route. The users health is at risk, but the government have now established 'Clean works' which is available free of charge for all drug injectors to help them avoid becoming infected with these viruses or infecting others. However, HIV is only one of the social problems that heroin can cause - in England and Wales there were 2,445 deaths related to drug poisoning in 2003. Another social problem involving substance misuse is crime. For example, many drug users (particularly heroin users) resort to crime such as shoplifting or burglary to fund their habit. The government introduced DTTO'S to stop the growing links between drug misuse and persistence to acquisitive offending. Alcohol however, is regarded as one of the most serious social problems in the United Kingdom today as it can cause, violent crime, family break ups, road accidents and death. No matter what substance is being misused it can cause a great deal of social problems in society. Substance misuse is being used to the extent were people are willing to get high form their drugs without thinking of the consequences. ...read more.