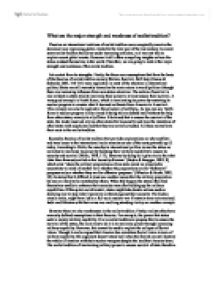 What are the major strength and weakness of realist tradition?

What are the major strength and weakness of realist tradition? Theories on international relations of realist tradition were accepted by most as the dominant way explaining global events for the later part of the last century. In recent years realist tradition had come under increasing criticism, as it was not able to explain recent global events. However it still offers compelling insights on how the states conduct themselves in the world. Therefore, we are going to look at the major strength and weakness of the realist tradition. Let us start from its strengths. Firstly, the three core assumptions that form the basis of the theories of realist tradition namely Statism, Survival, Self-help (Dunne & Schmidt, 2001, 150-155) were applicable in most of the situation in international politics. States are still currently viewed as the main actors in world politics although there are increasing influence from non-states actors too. The notion of survival is also evident as states tried to maximise their power to at least ensure their survival. ...read more.

If this spiral out of control, states might take drastic actions such as declaring war to stop what it perceive as threats against their security. The Cuban missile crisis, might have led to a full-scale nuclear war if restrain were not exercised. India and Pakistan with their arms race and long-standing rivalry are another example However there are also weaknesses in the realist tradition. Firstly, realists often have narrowly defined assumptions in their theories. For example, the power that states seek is mainly military capability. It is in realist tradition to propose that to ensure the survival of the states, the main way to do it is to maximise power through increasing military capability. However, this cannot be used to explain the collapse of Soviet Union. Though it can be argued that America has overtaken Soviet Union in term of military capability, this argument doesn't stand well when the Soviets can still destroy the whole of America with their nuclear weapons despite the lead that America have. ...read more.

Realist tradition placed too much emphasis on state, thus were largely unable to account for such problems caused by non-state actors much less to be able to solve them if the results of America's campaigns in Iraq and Afghanistan are anything to go by, with the blowing up of United Nations headquarter in Baghdad being the latest atrocity committed. In conclusion, realist tradition has its strengths in its explanation of the occurrences of wars between states and its principle of self-help is still very much regarded as the way to ensure the survival of the state by most statesman. However, realist tradition was increasing being seen as unable to adapt itself to the "New world", where states are cooperating in more ways than ever before, in the case of European Union, and the rise of non-state actors such as the terrorists playing more significant roles in world politics. Therefore realist tradition must reconstruct itself to take into accounts the new phenomenon that is happening in the world so as to not run a risk of becoming obsolete. ...read more.