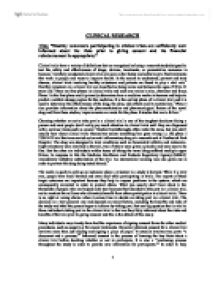 CLINICAL RESEARCH Title: "Healthy volunteers participating in clinical trials are sufficiently well informed about the risks prior to giving consent and the financial reimbursement is appropriate." Clinical trials have a variety of definitions but are recognised as being a research study designed to test the safety and effectiveness of drugs, devices, treatments, or preventative measures in humans.1 Carefully conducted clinical trials are seen as the fastest and safest way to find treatments that work in people and ways to improve health. In the search to understand, prevent and treat disease, clinical trials involving healthy volunteers and patients are found to play a vital role.2 Healthy volunteers in a clinical trial are classified as being males and between the ages of 18 to 45 years old.1There are four phases in clinical trials and each one varies in size, character and focus. Phase I is the first phase and it primarily determines how a medicine works in humans and helps to predict a suitable dosage regime for the medicine. It is the earliest phase of a clinical trial and it is used to determine the effectiveness of the drug, the dose, side effects and its metabolism.3 Phase I also provides information about the pharmacokinetics and pharmacological factors of the novel drug and from these studies, improvements are made for the phase II studies that are to follow.3 Choosing whether or not to take part in a clinical trial is one of the toughest decisions facing a person and most people don't really pay much attention to clinical trials until they are diagnosed with a serious ...read more.

The risks may be unpleasant, serious or even life-threatening side-effects to experimental treatment.6 From studies carried on informed consent the question whether healthy volunteers participating in clinical trials are sufficiently informed of the risks is debateable. In a paper by Griffin7 on how much information do participants retain from the informed consent process it examined how previous studies had reported mixed information about how much information study participants actually can read, understand and retain after completing the informed consent process. It examined how fewer studies "had examined disparities in the retention and recall of information by patient factors, such as age, education and race."7 Not "retaining or being able to recall information from the informed consent process has potentially important ethical and legal implications and consequences for research quality and integrity especially when found in populations that commonly are underserved or underrepresented in clinical trials."7 In this paper by Griffin a study7 was carried out in order to determine how much basic knowledge participants finishing a "five year, multi-centre, double-blinded randomized, placebo controlled clinical trial had about the study."7 The participants were asked at their final follow-up visit three multiple-choice questions which were: the "study's purpose; the name of the medication under investigation and the main side effect of the medication."7 The associations between knowledge of these fundamental details and participant social and demographic factors were investigated. A majority of participants correctly recalled the study's purpose (64.7%) and medication (79.6%), but few correctly reported the main side effect (31.1%). ...read more.

One healthy volunteer who was remained unnamed in the news stated he had participated in clinical trials for over 9 years and felt that he was reimbursed suitably as the money had helped him to pay off his debts yearly. Also he did not feel anxious about participating as a healthy volunteer in any clinical trial after the disastrous effects of the TGN1412 trial. But what is also surprising is in a journal article by Moberly11 he states that despite this catastrophe that occurred "clinical trial recruiters saw surges of interest from would-be volunteers." Although this was mainly from individuals who were unaware that they could get paid for participating in phase I trials as healthy volunteers. It was questioned whether this surge that was seen would "lead to increased recruitment"11 in clinical trials. It should be noted that those six individual men who suffered multiple organ failure after participating in the TGN1412 trial feel that no amount of money can compensate for the severe effects they have incurred. Therefore the �2,000 they were each paid to take one dose of the drug is not financially adequate.11 The findings from many papers such as that from Griffin7 and Lavori8 suggest that even the most basic information may not be understood or retained by important subgroups of patients enrolled in clinical trials but participants in most cases are fully informed about the risks involved in the trial. By implementing effective strategies, such as "additional time and effort for consent or repetition of study information, may be necessary in order to assure ethical and valid consent."7 In relation to whether financial reimbursement is appropriate in my eyes is debateable. ...read more.