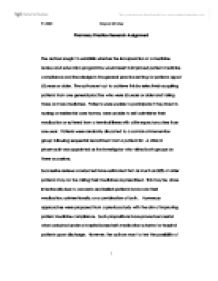 Pharmacy Practice Research Assignment The authors sought to establish whether the incorporation of a medicine review and education programme would result in improved patient medicine compliance and knowledge in the general practice setting for patients aged 65 years or older. The authors set out to achieve this by selectively acquiring patients from one general practice who were 65 years or older and taking three or more medicines. Patients were unable to participate if they lived in nursing or residential care homes, were unable to self-administer their medication or suffered from a terminal illness with a life expectancy less than one year. Patients were randomly allocated to a control or intervention group following sequential recruitment from a patient list. A clinical pharmacist was appointed as the investigator who visited both groups on three occasions. Successive reviews conducted have estimated that as much as 50% of older patients may not be taking their medicines as prescribed. This may be done intentionally due to concerns and beliefs patients have over their medication, unintentionally, or a combination of both. Numerous approaches were proposed from a previous study with the aim of improving patient medicine compliance. Such propositions have proved successful when adopted under a hospital-based self-medication scheme for hospital patients upon discharge. ...read more.

The study received approval from the Local Research Ethics Committee and gained informed consent from participants although the author does not describe how consent was obtained. The evidence provided by the study is direct, i.e. the use of the intervention and the resultant outcome occurred in the same study, in contrast to indirect evidence where at least two bodies of evidence are required to relate the integration of the intervention to the observed outcome, (Eddy 1997). The authors reported an increase in compliance on the basis of one study. Ideally, the health care intervention would be evaluated over multiple studies. This would provide a larger sample size and increase the likelihood of establishing whether the increase in compliance was attributable to chance. Subjects were randomly assigned to either the control or intervention group. This helped ensure that both groups were equivalently matched prior to treatment enhancing the internal validity of the study. The authors avoided asking for volunteers as this would be unrepresentative of the older population as they are likely to have good compliance. The method used to calculate the required sample size of 160 participants was statistically valid so the sample size is sufficient. Exclusion criteria mean results have limited applicability, for example, many older people in population may be reliant on another person to administer their medicines. ...read more.

However, the subjects were selected from one GP practice in a suburban Leeds area which may not be representative of the compliance of older patients elsewhere. Previous studies have suggested that a compliance figure of 85% is needed for older patients to benefit from treatment, (Raynor et al 1993). This study has found that the implementation of a medicine review and education programme surpassed this compliance figure in the short term. This study is more substantial than a previous one which assessed compliance of elderly patients in the hospital setting, (Lowe et al 1995). Although both studies adopted an identical study design (RCT), this study recruited a sample that is almost twice the size and provided a longer follow up duration allowing more time for the effect of the intervention to be revealed. Furthermore, the experimental population are more representative of the patients who will ultimately receive the intervention as older people are generally treated in general practice more often. In conclusion, the study highlights a significant improvement in patient compliance and awareness of medicines for older patients in primary care following a medicines review and education programme intervention. The sample size was sufficient to meet the study's aims while the study design was most appropriate for the purpose of the study. However, several limitations of the study exist including issues of external validity, duration of follow up, number of sites and exclusion criteria. ...read more.