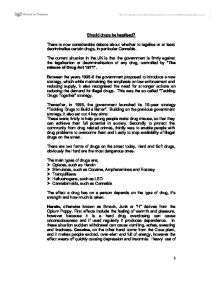 Should drugs be legalised? There is now considerable debate about whether to legalise or at least decriminalise certain drugs, in particular Cannabis.

Should drugs be legalised? There is now considerable debate about whether to legalise or at least decriminalise certain drugs, in particular Cannabis. The current situation in the UK is that the government is firmly against the legalisation or decriminalisation of any drug, controlled by "The misuse of Drug Act 1971". Between the years 1995-8 the government proposed to introduce a new strategy, which while maintaining the emphasis on law enforcement and reducing supply, it also recognised the need for stronger actions on reducing the demand for illegal drugs. This was the so-called "Tackling Drugs Together" strategy. Thereafter, in 1998, the government launched its 10-year strategy "Tackling Drugs to Build a Better". Building on the previous government strategy, it also set out 4 key aims: These were; firstly to help young people resist drug misuse, so that they can achieve their full potential in society. Secondly to protect the community from drug related crimes, thirdly was to enable people with drug problems to overcome them and Lastly to stop availability of illegal drugs on the street. There are two forms of drugs on the street today, Hard and Soft drugs, obviously the Hard are the most dangerous ones. The main types of drugs are; > Opiates, such as Heroin > Stimulates, such as Cocaine, Amphetamines and Ecstasy > Tranquillisers > Hallucinogens, such as LSD > Cannabimoids, such as ...read more.

Besides all of this, Cannabis does have some positive effects, tests have shown that it is an effective reliever of multiple sclerosis symptoms and hypoglycaemia and can be used as a medication for the terminally ill. It is for these reasons, that out of all the drugs, cannabis is the one which has seen most debate over whether it should be legalised or at least decriminalised, as it has already happened in Holland, Germany and in some parts of the USA. Many people in society are aware of the harmful and long-term effects of Cannabis, and therefore are strongly opposed to such a drug. However, there exists a number of opinions of which are focused heavily on the benefits of Cannabis in the medical industry, as well as the pleasurable benefits that Cannabis may bring to many individuals. Although cannabis is now being recognized for possessing a few medical benefits, I believe that it also creates an even greater harm to its users. Historically, cannabis has been used in the aid of treating such illnesses as anorexia, asthma, depression, and cancer. Yet, extensive research has proven that cannabis causes damage to major organs such as the brain, heart, lungs, and immune system. Those in favour of legalisation believe that if we remove drugs from the criminal law, the economic bass of the traffickers will be undermined, therefore drug ...read more.

I personally feel that if you make it acceptable for people to have drugs, they will find it acceptable and move from soft drugs to harder drugs, and it is for this reason that I am not in favour of decriminalisation. As despite the legal situation at present, it is estimated the regular user of drugs consume 800 tonnes every year in the UK, spending a total of �3.5 billion. Figures also show that the past decade the number of people aged between 16-59 has doubled to 4 million. Most of these regard the use of soft drugs as a normal part of growing up, therefore although there is apparently little danger of a fatal overdose, I do believe that cannabis is a gateway drug, that will lead to the use of harder drugs. With regards to cannabis being used as a medical drug, I do believe that the laws should be changed or looked into more and possibly grant doctors the authority to prescribe cannabis to their patients for special circumstances. Although there exists some evidence that Cannabis could serve as a useful drug in the industry of medicine, I believe that the benefits are greatly outweighed by the vast evidence that states the numerous harmful and long-term effects of Cannabis. And due to the evaluation of the advantages and disadvantage of Cannabis, I think legalization of such a drug should not be considered. 1 ...read more.