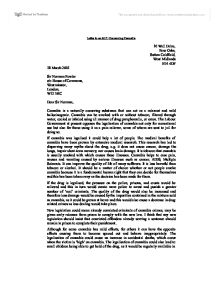 Letter to an M.P. Concerning Cannabis

Letter to an M.P. Concerning Cannabis 10 Wall Drive, Four Oaks, Sutton Coldfield, West Midlands B74 4DF 18 March 2001 Sir Norman Fowler c/o House of Commons, Westminster, London, W12 3HC Dear Sir Norman, Cannabis is a naturally occurring substance that can act as a relaxant and mild hallucinogenic. Cannabis can be smoked with or without tobacco, filtered through water, cooled or inhaled using all manner of drug paraphernalia, or eaten. The Labour Government at present opposes the legalisation of cannabis not only for recreational use but also for those using it as a pain reliever, some of whom are sent to jail for doing so. If cannabis was legalised it could help a lot of people. The medical benefits of cannabis have been proven by extensive medical research. ...read more.

If the drug is legalised, the pressure on the police, prisons, and courts would be relieved and this in turn would create more police to arrest and punish a greater number of 'real' criminals. The quality of the drug would also be increased and therefore less damage would be caused by the impurities contained in the mixture sold as cannabis, as it could be grown at home and this would also cause a decrease in drug related crimes as less dealing would take place. New legislation could mean already convicted criminals of cannabis crimes, may be given early releases from prison to comply with the new law. I think that any new legislation should insist that convicted offenders already serving a sentence should remain in prison to complete their punishment. ...read more.

The legalisation of cannabis for those over 18 would still mean that there is an illegal market for those under 18 and therefore does not eliminate illegal sales. This is shown in Holland were the drug is legal to those over 18 and this has meant that the use of the drug in those under 18 has tripled between 1988 and 1992. Alaska tried legalising cannabis but it was stopped by a referendum after 8 years as the use of drugs increased, crime increased, use of cannabis by those under 18 went up and the harm from drug use increased causing an increase in health care costs. These are only a few arguments both for and against the legalisation of cannabis. In my opinion I think that cannabis should be made legal but for medical purposes only and I would appreciate your views on the subject. ...read more.