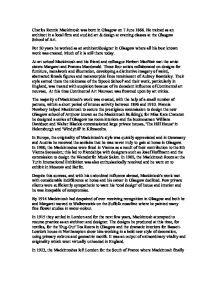 Charles Rennie Mackintosh was born in Glasgow on 7 June 1868. He trained as an architect in a local firm and studied art & design at evening classes at the Glasgow School of Art. For 20 years he worked as an architect/designer in Glasgow where all his best known work was created. Much of it is still there today. At art school Mackintosh and his friend and colleague Herbert MacNair met the artist sisters Margaret and Frances Macdonald. These four artists collaborated on designs for furniture, metalwork and illustration, developing a distinctive imagery of weird, abstracted female figures and metamorphic lines reminiscent of Aubrey Beardsley. Their style earned them the nickname of the 'Spook School' and their work, particularly in England, was treated with suspicion because of its decadent influence of Continental art nouveau. ...read more.

In Europe, the originality of Mackintosh's style was quickly appreciated and in Gemmany and Austria he received the acclaim that he was never truly to gain at home in Glasgow. In 1900, the Mackintoshes were feted in Vienna as a result of their contribution to the 8th Vienna Secession; this led to friendships with designers such as Josef Hoffmann and the commission to design the Wamdorfer Music Salon. In 1902, the Mackintosh Room at the Turin Intemational Exhibition was also enthusiastically received and he went on to exhibit in Moscow and Berlin. Despite this success, and with his undoubted influence abroad, Mackintosh's work met with considerable indifference at home and his career in Glasgow declined. ...read more.

The designs he produced at this time, for textiles, for the 'Dug-Out' Tea Room in Glasgow and the dramatic interiors for Bassett-Lowke's house in Northampton show him working in a bold new style of decoration, using primary colours and geometric motifs. It was an output of extraordinary vitality and originality which went virtually unheeded in England. In 1923, the Mackintoshes left London for the South of France where Mackintosh finally gave up all thought of architecture and devoted himself entirely to painting landscapes. He died in London, of cancer, on 10 December 1928. Although Mackintosh died relatively unnoticed in Britain his work was not going to be forgotten. Today things are made based on his designs, which usually involved unopened flower buds or roses and stripes. ...read more.