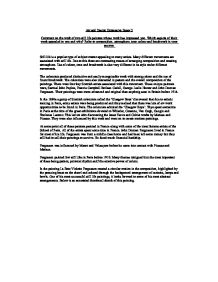 Comment on the work of two still life painters whose work has impressed you. Which aspects of their work appealed to you and why? Refer to composition, atmosphere, tone colour and brushwork in your answer.

Art and Design Expressive Essay 3 Comment on the work of two still life painters whose work has impressed you. Which aspects of their work appealed to you and why? Refer to composition, atmosphere, tone colour and brushwork in your answer. Still life is a popular type of subject matter appealing to many artists. Many different movements are assosiated with still life. Due to this there are contrasting means of arranging composition and creating atmosphere. Use of colour, tone and brushwork is also very different in its style under differnet movements. The colourists produced distinctive and easily recognisable work with strong colour and the use of fluent brushwork. The colourists were also interented in pattern and the overall composition of the paintings. ...read more.

At some point all of these painters painted in France along with some of the most famous artists of the School of Paris. All of the artists spent some time in France. John Duncan Fergusson lived in France for most of his life. Fergusson was from a middle class home and had been left some money but they still had to sell their paintings to survive. He faced much financial hardship. Fergusson was influenced by Manet and Velasquez before he came into contact with Picasso and Matisse. Fergusson painted few still lifes in Paris before 1910. Many themes intrigued him the most important of these being pattern, pictorial rhythm andf the emotive power of colour. In the painting La Bete Violette Fergusson created a circular motion in the composition, highlighted by the prancing beast on the shawl and echoed through the background arrangement of curtains, lamps and bowls. ...read more.

of the Glebe Mills in Hawick. Redpath enroled at Edinburugh College of Art in October 1913 and was a very talented student. At the end of the post graduate year she was recommended for the highest honour the college could confer on a student; a travelling scholorship worth �120. She visited Brussels, Bruges and Antwerp where she was particularly impressed by the paintings of 15th century Flemish artist Rogier van der Weyden. She also travelled to Paris and Florence and was heavily influenced by early Italian Art. When she returned to Hawick she married James Beattie Michie, an architect whom she had known since childhood and for many years aftrerwards her proffessional career was sacrificed to raise her family of three sons. The family lived in France for a long time and when they ...read more.