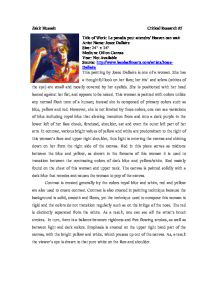 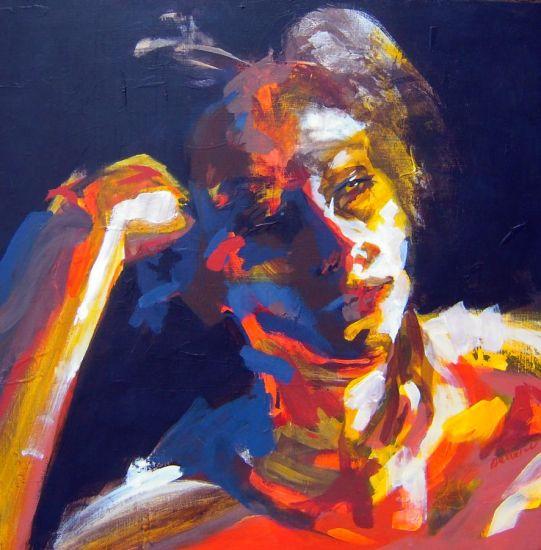 This painting by Josee Dallaire is one of a woman. She has a thoughtful look on her face; her iris’ and sclera (whites of the eye) are small and mostly covered by her eyelids. She is positioned with her head leaned against her fist, and appears to be naked. This woman is painted with colors unlike any normal flesh tone of a human; instead she is composed of primary colors such as blue, yellow and red. However, she is not limited by these colors, one can see variations of blue including royal blue that slowing transition from and into a dark purple in the lower left of her face cheek, forehead, shoulder, ear and even the outer left part of her arm. In contrast, various bright values of yellow and white are predominant to the right of this woman’s face and upper right shoulder, thus light is entering the canvas and shining down on her from the right side of the canvas. Red in this piece serves as midtone between the blue and yellow, as shown in the forearm of this woman it is used to transition between the contrasting colors of dark blue and yellow/white. Red mainly found on the chest of this woman and upper neck. The canvas is painted solidly with a dark blue that recedes and causes the woman to pop of the canvas.

Contrast is created generally by the colors royal blue and white, red and yellow are also used to create contrast. Contrast is also created in painting technique because the background is solid, smooth and flows, yet the technique used to compose this woman is rigid and the colors do not transition regularly such as on the bridge of the nose. The red is distinctly separated from the white. As a result, one can see all the artist’s brush strokes.  In turn, there is a balance between rigidness and free flowing strokes, as well as between light and dark colors. Emphasis is created on the upper right hand part of the canvas, with the bright yellow and white, which presses up out of the canvas. As, a result the viewer’s eye is drawn to that pure white on the face and shoulder.

Josee Dallaire is an artist centered on feminism, thus she encourages female empowerment. From this, the gesture/emotion on this woman’s face and the positioning of her arms and body; I think this piece is about a woman that has fallen in depression and is having thoughts of suicide. Yet, this piece captures this woman’s perseverance against her thoughts and emotions. She is coming out of the darkness of her thoughts and seeks inspiration from the world. The sunlight shines on her and gives her hope that she can strive for better. The title of the artist work “Le paradis peut attendre” shows how she is not ready to leave the earth because she has not contributed enough to society she doesn’t feel it’s her time. In a similar sense, this woman could have been diagnosed with a fatal illness and looks towards God to help her overcome her illness.

I believe that this was a successful piece; this was one of the reasons that I chose it. This is because I admire this artist’s style and it is one that I am trying to emulate in my own artwork. She has an amazing eye for contrasting and complementary colors that assist her in placing colors separately, yet having them come together to create a form/face; and her precision of strokes is also a contributor to her success in this piece.