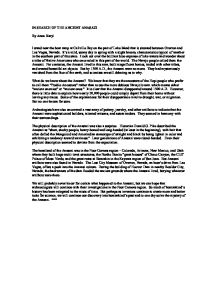 in search of the anasazi

IN SEARCH OF THE ANCIENT ANASAZI By Anna Karyl I stand near the boat ramp at Callville Bay on the part of Lake Mead that is situated between Overton and Las Vegas, Nevada. It's a mild, sunny day in spring with a slight breeze, characteristics typical of weather in the southern part of this state. I look out over the brilliant blue expanse of lake waters and wonder about a tribe of Native Americans who once ruled in this part of the world. The Navajo people called them the Anasazi. For centuries, the Anasazi lived in this area, built magnificent homes, traded with other tribes, and created beautiful art objects. But by 1300 A.D., the Anasazi were no more. ...read more.

It is clear that the Anasazi disappeared around 1300 A.D. However, there is little data to explain how nearly 20,000 people could simply depart from their home without leaving any traces. Some of the explanations for their disappearance involve drought, war, or migration. But no one knows for sure. Archaelogists have also uncovered a vast array of pottery, jewelry, and other artifacts to indicate that the Anasazi were sophisticated builders, talented artisans, and astute traders. They seemed in harmony with their surroundings. The physical description of the Anasazi was also a surprise. Historian Donald G. Pike described the Anasazi as "short, stocky people, heavy-boned and long-headed (at least in the beginning), with hair that often defied the Mongoloid and Amerindian stereotype of straight and black by being lighter in color and exhibiting a tendency toward waviness." ...read more.

But Anasazi artifacts were also found in Nevada. The Lost City Museum of Overton, Nevada, an hour's drive from Las Vegas, offers a peek into the Anazasi culture. During the building of Hoover Dam in nearby Boulder City, Nevada, the backwaters of the dam flooded the ancient grounds where the Anasazi lived, burying whatever artifacts were there. We will probably never know for certain what happened to the Anasazi, but we can hope that archaeologists will continue with their investigations in the Four Corners region. So much of humankind's history has been relegated to the mists of time. But perhaps as inventors continue to create more and better tools for science, we will continue our discovery into humankind's past and to one day solve the mystery of the Anasazi. *** ...read more.