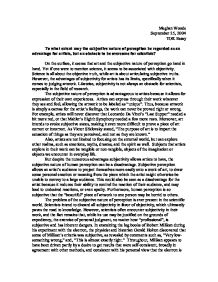 To what extent may the subjective nature of perception be regarded as an advantage for artists, but an obstacle to be overcome for scientists?

Meghan Woods September 25, 2004 TOK Essay To what extent may the subjective nature of perception be regarded as an advantage for artists, but an obstacle to be overcome for scientists? On the surface, it seems that art and the subjective nature of perception go hand in hand. Yet if one were to mention science, it seems to be associated with objectivity. Science is all about the objective truth, while art is about articulating subjective truths. However, the advantages of subjectivity for artists has its limits, specifically when it comes to judging artwork. Likewise, subjectivity is not always an obstacle for scientists, especially in the field of research. The subjective nature of perception is advantageous to artists because it allows for expression of their own experiences. Artists can express through their work whatever they see and feel, allowing the artwork to be labeled as "unique". Thus, because artwork is simply a canvas for the artist's feelings, the work can never be proved right or wrong. For example, artists will never discover that Leonardo Da Vinci's "Last Supper" needed a bit more red, or that Mahler's Eighth Symphony needed a few more rests. Moreover, art intends to evoke subjective states, making it even more difficult to prove a piece of art correct or incorrect. ...read more.

While these criteria seem reasonable enough, they carry inherent dangers. Even today, a fundamental explanation of the precise numerical value of the charge on the electron remains deficient. Previous results may have been fundamentally flawed, while the demand for self consistent results may mask the existence of subtle but genuine properties of the electron. Milikan could have also been proven wrong in his belief that the electron was the fundamental component of an atom. Instances in which scientists implement subjectivity as a tool can serve as an obstacle by delaying the scientist's progress, or delaying progress in the scientific field. For example, when George Zweig, a young American theorist, emphasized the physical reality of quarks, his papers were rejected and his appointment to a position at a major university was blocked, labeled by the head of department as a "charlatan." Similarly, the astronomical community refused to accept reports of "stones falling from the sky," as had been long reported by ordinary people, until investigations by Biot in the early 19th century. This refusal seems to have stemmed from a prejudice against the notion that the Earth could be subject to potentially serious bombardment. Additionally, scientists must overcome the subjective nature of perception in almost every area of their field. ...read more.

For example, there are scientists who have proposed what were considered radical ideas at the time, but were later widely supported theories within their Page 3 field. Many of these scientists claimed to have a "gut feeling" that the theory was right, or that the theory was "too beautiful to be wrong." Subjective methods have a vital role to play in everyday research as well. All working scientists are bombarded with new research findings and theoretical claims, put forward in seminars, journals, and books. Many of these new claims appear to differ from current belief. Scientists need a way of judging which claims to take seriously and pursue, and in the absence of any hard evidence, they resort to a range of criteria which is infiltrated with subjectivity. This subjectivity ranges from personal experience and knowledge about the plausibility of the claim to criteria such as the reputation of the researchers making the claims, their academic affiliation, and the quality of the journal in which their claims appear. The subjective nature of perception has both advantages and disadvantages for the artist as well as the scientist, having a larger disadvantage for the scientist trying to work in a world of objectivity. Yet despite the disadvantages for the artist and the scientist, the subjective nature of perception is what gives life to the art we encounter and gives us the benefits to scientific discoveries made every day. ...read more.