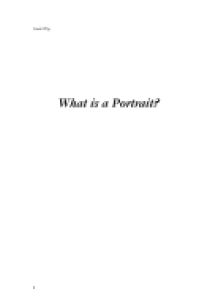 What Makes A Portrait

﻿Sarah Way What is a Portrait? ________________ List of Illustrations 1. Ruud Van Empel- World #1 http://web.ruudvanempel.nl/works/116-world-1.html 1. Nathan Gallagher, Gucci Guilty http://stylefrizz.com/201008/evan-rachel-wood-is-gucci-guilty-perfume-ad-campaign-girl/ 1. Robert Mapplethorpe- Apollo http://www.mutualart.com/Artwork/APOLLO--1988/547FD8F8B6661267 1. William Eggleston- ??untitled?? from Los Alamos http://www.egglestontrust.com/ 1. Arnold Newman- Alfried Krupp http://michaelgrubb.blogspot.com/2010/08/arnold-newman-father-of-environmental.html 1. Frankenstein- Unknown http://www.doctormacro.com/movie%20star%20pages/Karloff,%20Boris-Annex.htm 1. ________________ As the most technologically advanced era to date, the world has the ever present ability to capture, publish and view portraits at an astonishing rate. Whether they be for passports, profile pictures or social publications, the portrait is everywhere in our day to day life. For me, this effortless capability poses the question; do we take portraits for granted? Do we ever stop to think why we?re capturing a portrait? Or, the question I am most interested in; what makes a portrait? David Bate summarises in his publication ?The Key Concepts: Photography? that a portrait comprises of four main components; the face, the pose, the clothing and location in which the photograph is shot?[1]. Whilst this is, generally speaking, true; I believe there are many other factors to be considered when looking at the elements that make up a portrait that perhaps Bate didn?t include. Another approach with regards to the general theory suggested by Bate is that sometimes, one or more of these four elements don?t add to the audience?s general understanding of the photograph or, are not present in the image at all. ...read more.

As well as the use of photoshop, the audience must be careful not to be misled by the discriminating decisions made by the photographer through the use of framing, which he or she can use to manipulate the entire meaning of a photograph. Whilst we can make judgments based on the four points provided by David Bate, we must stop to wonder what extends beyond the edges of the image before us. This also ties in with the fact that photographs are simply a snapshot in time and the only sense we are able to utilise in our analysis of an image is sight. The book ?World Photography? is a compilation edited by Bryn Campbell consisting of some of the greatest contemporary photographers known to date, discussing their views on photography. In the publication, Arnold Newman is quoted saying ?I?m convinced that any photographic attempt to show the complete man is nonsense, to an extent. We can only show, as best we can, what the outer man reveals; the inner man is seldom revealed to anyone??[4]This statement backs up my idea that a portrait is merely a freeze frame during which the subject deliberately portrays themselves only as they wish to be depicted for all to see. That nobody knows what the reality was before or after the photograph was taken. But what we do know is that only the precious few are willing and comfortable to so openly display themselves in the brutally honest manner that exposes them, warts and all, in a medium so ephemeral and for all to see. ...read more.

So, to go through David Bate?s motions we must start by looking at the face. His facial expression suggests he is a rather ominous character which is conveyed mostly through his eyes that seem to hold a hint of a smile. His face also appear to by oddly symmetrical, making him appear unnatural and therefor frightening. The clothes in which he is photographed are sharp and tailored which has always had the connotations of business, authority and power as well as indicating wealth and professionalism. With regards to location which is clearly quite an industrial looking building appears cold, characterless and unwelcoming adds to the impression that Krupp is not a friendly or well-meaning character. By looking at his body language, in particular the interlocking hands, Krupp looks speculative; as if plotting or scheming. He sits with broad shoulders which also emphasise his power and confidence making him appear quite an intimidating character. This particular image has likenesses to the cartoon character Montgomery Burns from television series; The Simpsons. This could suggest that this is a stereotypical stance for a villainous person with regards to face, body language and clothing. However, whilst all of this is the making of this portrait as it clearly portrays the character, I believe that the lighting is also fundamental in this particular image. As mentioned previously, the lighting from underneath casts strong shadows across the face giving Krupp the menacing image he usually emanates. ...read more.