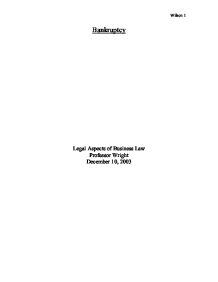 Bankruptcy Legal Aspects of Business Law Professor Wright December 10, 2003 When most people hear the term bankruptcy it sends an over-lining shock to there system. And this is immediately followed by feelings of pity or sorrow for the individual or individuals that are experiencing the ordeal. But like other legal terms, bankruptcy has been getting a bad reputation that needs to be better clarified or defined. Bankrupt as defined in the text means "the state or condition of one who is unable to pay his debts as they are, or become, due". This basically means that he or she is not able to accumulate the necessary funds to pay off a debt or bill that is past due. Straight bankruptcy in the text means "the nature of a liquidation proceeding and involves the collection and distribution to creditors of all the bankrupt's nonexempt property by the trustee in the manned provided by the act". This statement means that a person's assets are analyzed and further steps are taken to better define what is exempt and nonexempt property wise. According to the Legal Information Institute there are two basic types of Bankruptcy proceedings, "A filing under Chapter 7 is called liquidation. ...read more.

This statement offers a sense of stability to their customers so that they wont lose any more customers later on down the line. Dozens of Internet and telecommunications companies have went under but some like Global Crossing keep operating their networks without interruption. Michael St. John's states, " I think there will be some disruption but it will be pretty localized as companies decide what they want to do in light of the bankruptcy". St. John also states, " At least for the next three months or so you'll have companies deciding they don't want to worry about WorldCom and moving off their system" " If WorldCom actually goes out of business the disruptions will be a bit more major". Essentially St. John is stating that the bankruptcy with WorldCom is not going to have such an adverse affect on the customers but if they go out of business then there will be a major problem. And in the event that something does happen with WorldCom's network very few large companies would be affected if that does take place. Meeks states, " Most companies have contingency plans, in the form of redundant connectivity contracts, in case their primary network goes down. ...read more.

I touched on the terminology, the different types, what kind of question are generally asked, a company called WorldCom and their bankruptcy issues and personal bankruptcies within American today. And personally I feel that I have a better understanding of bankruptcy and a more visual concept of what bankruptcy really means. It is not a term that sends fear to business owners instead it is a tool that can more useful than hurtful. Most businesses today use bankruptcy as a tool or in other words another chance to start over and fixed and past mistakes that may have contributed to their downfall. Some companies survive after bankruptcy and others fall apart into further debt. To me the companies that do succeed represent "the phoenix" which is a Greek bird that dies in the fire but is reborn again because of that same fire that took it life. This means that bankruptcy can be seen as another chance to be successful. And for those that can figure out the formula to success despite a previous downfall the benefits can be beyond comprehension. What I have learned from the articles I read and the book is that bankruptcy can be used as an advantage or disadvantage depending on the individuals experience in the wide world of business. Wilson 1 ...read more.