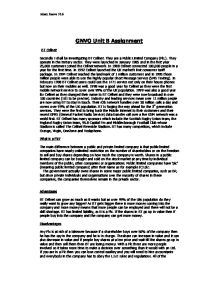 GNVQ Unit B Assignment BT Cellnet Secondly I shall be investigating BT Cellnet. They are a Public Limited Company (Plc.). They operate in the tertiary sector. They were launched in January 1985 and in the first year 25,000 customers joined the Cellnet network. In 1988 Cellnet connected 100,000 people in a year for the first time. In 1992 Cellnet launched the UK market's first consumer tariff package. In 1994 Cellnet reached the landmark of 1 million customers and in 1995 those million people were able to use the highly popular Short Message Service (SMS Texting). In February 1998 BT Cellnet users could use the 1471 service not only on their house phones but now on their mobiles as well. 1998 was a good year for Cellnet as they were the first mobile network service to cover over 99% of the UK population. 1999 was also a good year for Cellnet as they changed their name to BT Cellnet and they were now broadcast in over 100 countries (101 to be precise). ...read more.

Ownership is said to be peaking. The main players are Orange, Vodaphone, BT Cellnet, Airtouch, Virgin and One2One. A new innovation is pre-pay phones - though these are supposed to be more expensive in the long run. Business Activities Bt Cellnet's main business activity is to provide a tariff to the public. They provide different tariffs for example they could sell a tariff where you get cheap call in the morning and more expensive calls at night or the could sell you a tariff where you get cheap calls at night but more expensive calls in the morning depending on how you use your phone. Influences On Business Bt Cellnett are situated all over the world so they do not have an exact location but the main store is in London. This is because all imports can be easily accessed because Heathrow and Gatwick airports. Most business people use BT Cellnett as it is the cheapest Phone Company and most landlines are BT so it is cheaper to call other business people or to call family at home or at work. ?? ?? ?? ?? Adam Reeve 10.6 ...read more.